150 years of KHS: from equipment trader from Dortmund to global turnkey supplier

150 years ago to the day, on October 1, 1868, Carl Kappert and Louis Holstein founded the Holstein & Kappert equipment trading company in Dortmund, Germany, thus laying the foundations for KHS.

Dortmund, October 1, 2018 – 150 years ago to the day, on October 1, 1868, Carl Kappert and Louis Holstein founded the Holstein & Kappert equipment trading company in Dortmund, Germany, thus laying the foundations for KHS. It took decades, however, for the enterprise to become a worldwide manufacturer of turnkey systems – many years of expansion, fusions and, first and foremost, continuous development of products geared to the future. Today, the KHS Group is one of the market’s leading systems providers for the beverage, food and non-food industries. For years the company has increasingly focused on sustainability in the development of new plant engineering.

“150 years of entrepreneurship and ingenuity have lent KHS the image it enjoys today. They are a central theme throughout our history and form the foundations upon which we now stand,” explains Burkhard Becker, chairman of the KHS Executive Management Board. Rolf Staab, executive vice-president of Human Resources for the KHS Group, also traces the success of the Dortmund systems supplier back to its roots. “Without the creativity, passion and perseverance of many generations of engineers, business personnel and factory workers our company wouldn’t have the international standing it holds today. Without them we wouldn’t enjoy the recognition our customers now show us.”

Pioneers since the first hour

KHS’ rise to worldwide partner to the beverage industry was a continuous process. It all began with the foundation of the Holstein & Kappert company in 1868. The Dortmund equipment trader initially only sold technical apparatus for the beverage industry. At the beginning of the 20th century the company began producing its own machinery which washed bottles and filled and packaged beverages, among other things.

The Seitz-Werke and Enzinger also celebrated their first successes in the second half of the 19th century. With the help of their innovative filters they revolutionized the wine and beer industries.

The fusion between Holstein & Kappert and Seitz Enzinger Noll Maschinenbau AG (SEN) based in Bad Kreuznach and Worms in 1993 was the ultimate milestone in the company’s history. Under the umbrella of the Klöckner-Werke, majority shareholder of Holstein & Kappert since 1979, the two manufacturers merged to form KHS Maschinen- und Anlagenbau AG.

Manfred Rückstein, head of Corporate Communication at KHS from 1991 to 2012, looks back to the time after the merger, which was at first quite turbulent. “We had to make it clear to our customers, who for decades had been loyal to either the one or the other brand, that the products from Bad Kreuznach, Worms and Dortmund were now all on an even par. In order to achieve this goal, it was absolutely essential to start using uniform product names.”

The fusion and the bankruptcy of the Klöckner-Werke were big challenges for KHS at the beginning of the 1990s. The solution was to have the company grow through further investments and acquisitions to become a turnkey supplier to the beverage, food and non-food industries.

Another factor which proved successful was the group’s early global orientation. At the end of the 19th century KHS’ predecessor companies were already looking for sales opportunities well beyond the German border. In 1893, for example, Lorenz Enzinger presented his innovations at the World Fair in Chicago. In addition to its five plants in Germany KHS today operates production facilities in the USA, Mexico, Brazil, India and China. The company is also represented by an extensive sales and service network on all of the relevant markets worldwide. “The name KHS is now synonymous throughout the globe with powerful filling and packaging systems for the beverage industry,” explains Becker.

Shaping the future with sustainable products

For years the KHS Group has increasingly focused on sustainability in the development of new, future-proof plant engineering. “As one of the market leaders in filling and packaging we’re fully aware of our responsibility to the environment. The issue of sustainability thus plays an important role in the development of our innovative and cost-effective products,” Becker states. Saving on resources is especially important in this context. Companies large and small the world over rely on energy- and resource-saving machinery to fill and package their bottles, cans and kegs. The KHS Group works towards producing lighter and lighter containers in its Bottles & Shapes™ program, to name just one example here. At drinktec 2017, for instance, the company introduced the lightest 0.5-liter PET bottle in the world to date, weighing just 5 grams. KHS also premiered a marketable concept for the forming and filling of plastic bottles which involves just one process step.

Further landmarks pertinent to the topic of sustainability include the development of the Nature MultiPackTM, which bonds bottle and can packs together using dots of adhesive instead of shrink film, and the invention of Plasmax barrier technology, which applies a coating of glass to the inside of PET bottles. Another of the new avenues KHS is exploring together with its customers is the digitization of the production process from 3D line design to virtual commissioning. With these and a number of further innovations in the pipeline the company is looking to the future with much optimism.

KHS GmbH manufactures modern filling and packaging systems for the high-capacity range at its headquarters in Dortmund, Germany, and at its factories in Bad Kreuznach, Kleve and Worms. The KHS Group's PET expertise is pooled at KHS Corpoplast GmbH in Hamburg, Germany, where innovative PET packaging and coating systems are developed and produced. NMP Systems GmbH, a wholly-owned subsidiary of KHS GmbH based in Kleve in Germany, designs and markets new, resource-saving packaging systems.

In 2017 KHS and its 5,070 employees achieved a turnover of around €1.137 billion. The companies in the KHS Group are 100% subsidiaries of the MDAX-listed Salzgitter AG corporation. 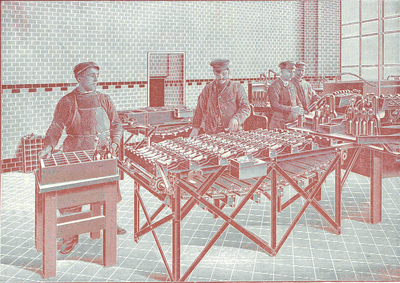 The facsimile of an original illustration from the Holstein & Kappert product catalog from 1906 depicts a patented “bottle labeling apparatus with a conveyor belt”.

One of the early winery bottle systems with a Holstein & Kappert bottle brushing system and the Nova Practica soaking machine. 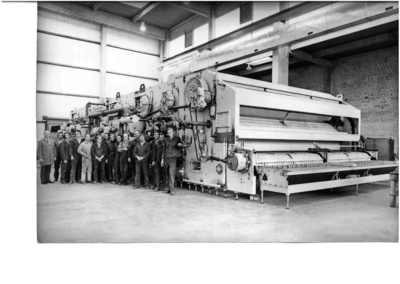 Despite extremely hefty international competition in 1971 Holstein & Kappert was awarded a contract by Asahi, the second-largest brewery in Japan, for three Omega Super DE double-end bottle washers – the biggest that Holstein & Kappert had built to date. In the photo the team in Dortmund proudly presents the machinery. 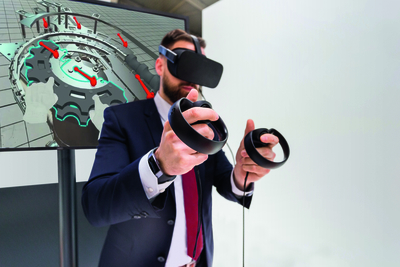 KHS has been setting standards in 3D line design for over ten years – now with an expert system which covers all stages in the process from the initial concept to final production.