Better conditions and growing demand are generating incredible growth among regional beverage bottlers in Tanzania. This also goes for Watercom – an enterprise that in the space of just a few years has invested in not one but two KHS lines for water, soft drinks and juice.

With persistently high annual growth rates of 5% to almost 8% since 2000, Tanzania is without a doubt one of the most dynamic markets in sub-Saharan Africa. Since the state ceased to be counted among the world’s poorest countries a few years ago, it’s been considered politically and socially stable, especially following the accession to office of President Samia Suluhu Hassan in March 2021. Unlike her predecessor’s rather authoritarian style of government, she follows a more liberal economic course, welcomes development aid and foreign investors and has declared war on corruption. “The Royal Tour”, a documentary film and brainchild of President Samia Suluhu Hassan, was filmed to publicize the country’s tourism and investment opportunities. The production has since boosted investment in Tanzania.

The population in this East African country is growing fast, as are the middle classes, specifically in urban regions. This provides opportunities for the food and beverage industries in particular that have been successfully expanding for years now. A number of multinational companies are now starting to gain a foothold in Tanzania; however, those who chiefly benefit from this development are the inland conglomerates who are (still) able to largely divide up the market between themselves. On the one hand, this is thanks to the political regulation and reluctance to invest prevalent in the past. On the other, this is also because Tanzanian consumers are primarily loyal to local products and brands.

One of the big corporate associations is the Oilcom Group based in the former capital of Dar es Salaam whose main success lies – as the name suggests – in the trade in petroleum products. Other fields of business include transport logistics and food production. Since 2005 the family-owned concern has also invested in the booming milk production and processing business: its subsidiary Milkcom works the entire value chain from cattle farming to bottling to the sale of finished dairy products – typical for the high degree of vertical integration in the Tanzanian food industry.

A few years back Oilcom added water to its portfolio in the form of the Afya brand. This market is also enjoying rapid development because – among various other strategies – the government has made it its express policy to encourage people to drink clean bottled water to prevent risking their health. Successfully so: in no other African country is as much packaged water drunk per capita as in Tanzania today. The philosophy of Oilcom subsidiary Watercom founded for this exact purpose is thus to provide high quality. This refers to both the purity and mineralization of the actual product and to its production process in accordance with common standards. Here, the use of up-to-the-minute high-tech from Europe is considered a unique selling point.

As a general rule, when it comes to technical equipment multinationals in Tanzania prefer the state of the art – something German engineering companies in particular are able to supply. “This country is a hugely important market for us,” explains Denise Schneider-Walimohamed, managing director of KHS East Africa. “In the last two years we’ve sold most of our machines in the East Africa sales region to Tanzania – both to big companies and smaller suppliers, more and more of whom are entering the market. PET lines are in especially high demand: plastic bottles are the most affordable for local consumers. As is usual in Tanzania, beverage producers want a high level of independence by not only manufacturing the containers themselves but also the preforms or caps, for example.”

Watercom also trusts in the reliability and performance of German machinery: in the search for high-quality technical plant engineering when adding the soft drinks segment to its range of business activities in 2017, KHS was on board. The Dortmund systems supplier installed the first line for water and carbonated soft drinks. On it, up to 40,000 0.5-liter bottles can be filled an hour. The setup includes all components from the syrup room through a stretch blow molder/filler block and labeler to packers and palletizers. The latter are not so common in the African region as here palletizing – if performed at all – is usually manual because of low personnel costs and more modest line outputs. As an additional service, the experts from the Bottles & Shapes program contributed a distinctive bottle design for various formats that uses less material and is considerably helping to boost the brand image.

On course for growth

“Cooperation both at the planning stage and during installation, right up to final commissioning, was excellent at all times,” states Salum Nahdi happily, director and CEO of Watercom. “The line performance has us convinced, as does the fact that our expectations regarding efficiency, optimum use of resources and waste management have been met.” It thus didn’t take long before KHS was rewarded with a second contract for proving itself to be a reliable partner. A second line practically identical to the first was subsequently ordered in 2020. However, in the meantime Watercom’s portfolio has expanded further: its new fruit juice beverages need a second syrup room and a flash pasteurizer to increase shelf lives. Another difference to the first line is that KHS’ stretch blow molding technology has evolved further since 2017: its latest-generation InnoPET Blomax Series V is compelling with its intelligent process control, near infrared (NIR) heater and simple modular design. Numerous optimizations also reduce the consumption of energy and blow air by up to 40%. The two KHS sister lines stand side by side – with the practical added advantage that the blow molds for the various bottle formats can be easily swapped between one line and the other as the production plan dictates.

Within the shortest possible time, thanks to investments to the tune of around €100 million the company has established itself as one of the largest bottlers in the country. On its company premises covering a total of 800 hectares it now operates no fewer than three water lines and two lines for CSDs and juice – and can claim to be one of Tanzania’s market leaders. The beverage producer’s future plans for expansion reach far beyond the regional boundaries: a further production site is planned for the neighboring state of Malawi, where KHS will contribute a third line.

Regarding after-sales service, Nahdi particularly appreciates the fact that KHS engineers can be on site quickly should the need arise. This minimizes the length and cost of interruptions to operations. His only wish is that spare parts were available more speedily. He’d thus be pleased to learn that KHS is currently planning to extend its local commitment. “In addition to our site in Nairobi with its over 40 engineers, thanks to the positive development on the market we’ll soon be setting up a further service hub in Tanzania,” announces Schneider-Walimohamed. “In the future we can therefore give our customers even better support in after sales than we already do at the moment.”

The circular economy of the country with its populace of around 60 million is still in its infancy yet the politicians have recognized that they need to rethink and act anew on ecology. Whereas the recycling quota for plastic waste as a whole in Tanzania totals just 5%, the value for PET is already at 20% – and growing. No deposit system is yet in place but there are lots of collection points for used PET bottles that pay collectors by weight. The raw commodity is then sent for reuse to local recycling companies or – as is more often the case – to exporters. The big food processors and beverage bottlers are now increasingly contributing to the collection and further use of their packaging materials. “The government is committed to various recycling projects together with the national Confederation of Tanzanian Industries and a number of private stakeholders,” says Salum Nahdi. “We now have a market for recycled PET here, with manufacturers of plastic pallets and crates key clients.”

The bottler’s striving to act sustainably includes not just ecological but also social aspects. “We largely procure our raw materials from regional sources,” Nahdi explains. “By purchasing milk, fruit for our juices or other basic ingredients for our products from the people in the region, for instance, we’re helping to secure their jobs and livelihoods.” 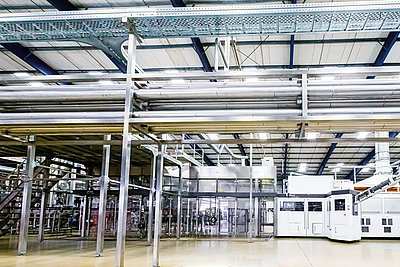 The heart of both lines are the InnoPET BloFill stretch blow molder/filler blocks, on which up to 40,000 bottles per hour can be manufactured and filled. 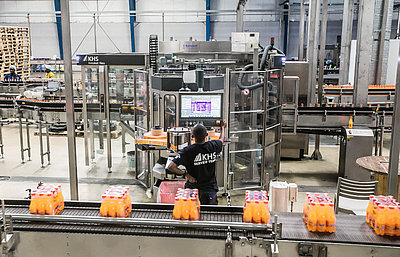 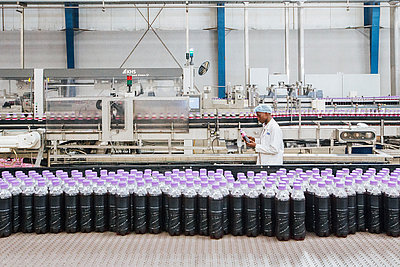 Afiya berry soda pop about to be labeled and packaged: a KHS Innopack Kisters SP shrink packer waits to perform its task in the background. 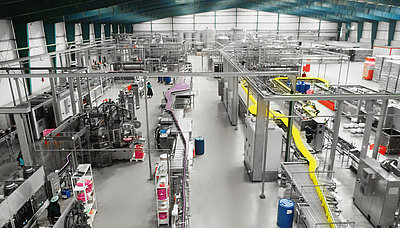 The two practically identical PET lines from KHS are right next to one another so that the blow molds can be easily swapped from one line to the other. 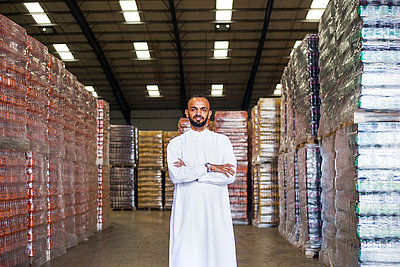 Salum Nahdi, director and CEO of Watercom, is pleased with the use of resources, line performance and efficiency on his KHS lines. 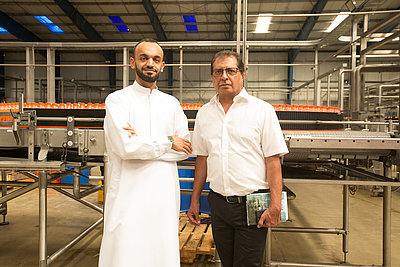 Salum Nahdi (left), director and CEO of Watercom, side by side with his contact at KHS, regional sales manager Dawood Hobaya.

“In the last two years we’ve sold most of our machines in East Africa to Tanzania,” says Denise Schneider-Walimohamed, Managing Director of KHS East Africa. 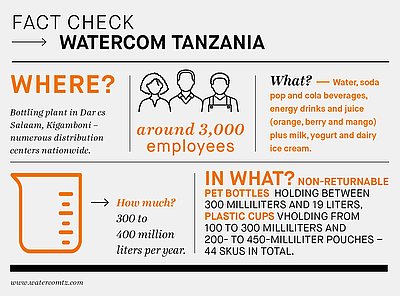