Conversion instead of new investment: KHS boosts efficiency and economy in bottle washing

Thanks to their great reliability KHS machines are often in use for many decades.

Dortmund, November 14, 2019 – Thanks to their great reliability KHS machines are often in use for many decades. Even after a very long period of operation it is not always necessary to reinvest. In essence the technology on bottle washing machines, for instance, has not changed. For years now the systems supplier has thus provided a variety of conversion packages which bring older machines up to date. This not only gives bottlers benefits in economy and efficiency but also cuts down on the use of resources and therefore helps to protect the environment. German beverage manufacturer Aqua Römer is one such customer to profit from a machine makeover.

When it comes to bottle washers in particular, replacing them means investing a great amount of cost and effort. The vast dimensions of the machinery alone often require bottlers to make constructional changes to their production plant, with some even having to open up the roof. For several years now KHS has offered a range of conversion packages which provide an alternative to procuring a new machine. With these the systems supplier brings old bottle washing machines for glass and PET bottles into line with the technical and ecological state of the art – with comparably little effort. As opposed to the actual technology, what has changed over the years is the amount of water and energy a machine like this consumes – namely much less. Practically every old machine can be upgraded and modernized within the space of just a few days.

With its capacity-dependent fresh water control option KHS installs a control valve to adjust the water supply, considerably reducing consumption at a lower machine capacity. Older equipment can also be fitted with KHS’ Liquid Efficiency Spraying System (LESS). This is an electricity-saving function for spray pumps which minimizes the spray pressure during downtimes. As a result the machine uses 80% less energy in standby mode. Optionally, a flexible spray pressure also enables light glass or PET bottles to be processed.

Converting the bottle washer to ECO carriers lowers the weight of the bottle pockets by 25%. This puts less mechanical load on the drive system. The refurbished machine’s lower heat absorption yields a better energy balance. Cleaning media is also saved. Using the ECO chain, a weight-optimized bottle pocket chain, and plastic bushings lengthens the service life by up to 25% while reducing the rolling friction and current consumption. KHS’ understanding of sustainability goes far beyond resource efficiency, however. “With our range of conversions we make sure that customers can operate their machines as efficiently and for as long as possible,” says Matthias Jansen, head of the Technical Support Service Division at KHS.

In the upgrade process KHS Service adapts the conversion to suit the individual requirements of the customer and finds practical solutions. Regular machine maintenance and an intact machine structure are the technical prerequisites needed for implementation of the aforementioned measures for improvement. These amount to a mere fraction of what a new investment would cost. “Within one to two weeks customers then have a machine standing in their production shop whose performance data is up to the minute,” smiles Jansen.

Aqua Römer in Mainhardt in Southern Germany is just one customer to benefit from a KHS upgrade. The machine there has been providing reliable service for so long that even electrical components which were available for many years can in some cases now no longer be sourced as spare parts. “We thus decided to upgrade,” states Marc Böttler, head of Engineering at the Mainhardt plant. On a returnable PET bottle line from KHS the beverage producer processes up to 24,000 bottles per hour holding from 0.5 to 1.5 liters. During the conversion to servodrives for the drive system it seemed prudent to also implement various measures to improve energy and media consumption. KHS thus installed its LESS function, ECO carriers and capacity-dependent fresh water spray. Böttler is convinced by the result. “We can now circulate the bottles on the bottle washer and don’t have to run them back if there’s a disruption. The line’s generally running much better. I’m reckoning on being able to use it for at least 15 more years.” As Aqua Römer is committed to sustainable production, Böttler is also delighted with the machine’s savings in energy and media.

The second-largest mineral water producer in Baden-Württemberg, according to the company’s own information, bottles mineral water and CSDs. Around 25 million bottles per year are produced on the returnable PET line from KHS, about an eighth of the bottler’s total output at three different production sites. In 2018 Aqua Römer was presented with the Reusable Systems Innovation Award by Environmental Action Germany and the Foundation for Reusable Systems.

KHS GmbH is one of the leading manufacturers of filling and packaging systems for the beverage, food and non-food industries. The KHS Group includes the following companies: KHS GmbH, KHS Corpoplast GmbH and numerous subsidiaries outside Germany, located in Ahmedabad (India), Sarasota and Waukesha (USA), Zinacantepec (Mexico), São Paulo (Brazil) and Suzhou (China).

KHS GmbH manufactures modern filling and packaging systems for the high-capacity range at its headquarters in Dortmund, Germany, and at its factories in Bad Kreuznach, Kleve and Worms. The group's PET expertise is pooled at KHS Corpoplast GmbH in Hamburg, Germany, where innovative PET packaging and coating systems are developed and produced. NMP Systems GmbH based in Kleve in Germany designs and markets new, resource-saving packaging systems. KHS is a wholly owned subsidiary of the SDAX-listed Salzgitter AG corporation. 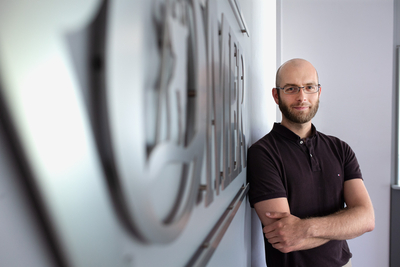 Marc Böttler at Aqua Römer is pleased with the conversion of his bottle washer which amounted to just a fraction of what a new investment would have cost. 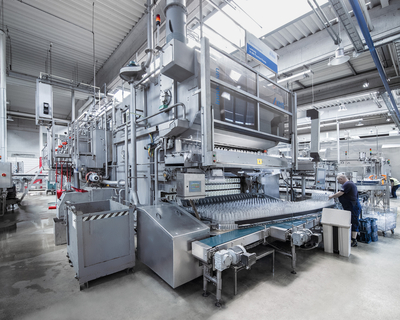 A bottle washer is one of the biggest machines on a line. For several years KHS has thus provided a variety of conversion packages which bring machines into line with the technical and ecological state of the art. 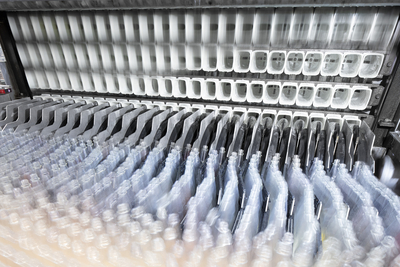 By reducing the weight of the bottle pockets the ECO carrier conversion package improves the energy balance.