A block system for the future

A trust lasting more than 35 years: KHS recently commissioned a new non-returnable PET line for Israeli beverage producer Tempo Beverages under very special circumstances – and in doing so combined its latest-generation stretch blow molding technology with a filler for the very first time.

In Israel Tempo is literally on everyone’s lips: as the biggest producer of alcoholic beverages and the third-largest supplier of soft drinks the brand is known to almost the entire population of 9.1 million. There’s hardly a household in the country without a bottle of beer, water, juice or cola from Netanya in the refrigerator. In 1952 a unique story of growth and success began in the city on the Mediterranean between Tel Aviv and Haifa. At the start of the 1990s Tempo Beverages became PepsiCo’s sole bottler in Israel and Heineken’s exclusive sales partner. In 2005 40% of the company, which is also the biggest brewery in Israel, came under the ownership of the Heineken Group. And nine years ago the beverage producer was made a licensee of the French spirits group Pernod Ricard. Tempo now clocks up sales of about €375 million, 45% of this with non-alcoholic beverages.

“Although we’re number three overall in Israel for non-alcoholic beverages, in some subsegments our iconic brands hold first place,” explains Daniel Beer, deputy CEO for Tempo. “These include Tempo soda water, for example, the malt beverage Mesher Malt and energy drink XL. We’re also strong on imported brands such as Nestea, S. Pellegrino and of course Pepsi.” There are thus three pillars to Tempo’s recipe for success as a holistic beverage supplier: an extremely broad portfolio in all segments, first-class customer service and the “unique DNA of our commitment”, as Beer puts it.

This commitment also encompasses the pioneering spirit that characterizes the company: here, great value is attached to the brewery and its lines being state of the art when it comes to technological innovation and that they adhere to the highest international standards. This is something of a tradition at Tempo. Around 20 years ago the bottler invested in a Blomax stretch blow molder from KHS – just one of many examples of the good relations it enjoys with the Dortmund systems supplier. “As the first major brewery in Israel, Tempo frequently has the latest machines and systems in operation,” emphasizes Michael Roche, head of Regional Center Middle East at KHS. “The company isn’t afraid to explore new avenues and take the risks sometimes associated with this – particularly with a reliable partner who’s been at their side for so long.”

“We’ve trusted in KHS for over 35 years,” confirms Haim Neori, electrical and process manager for Tempo. “And the machines are just as long-lasting as our business relationship. For instance, we’ve been using a KHS tunnel pasteurizer for our beer since the middle of the 1980s. We only gave this an extensive upgrade a few years ago. A semi-electronic long-tube juice filler from 1996 is also still in service here.” Other recent projects include an Innopro CX carbonator and a TLM packer system that KHS has realized in cooperation with Schubert. According to Neori, the greatest benefit of working with KHS lies not just in the engineering company’s sophisticated technical equipment, however. “We value the first-class technology. It’s undoubtedly some of the best there is for filling. However, we’re at least just as happy with our extremely professional contacts on all levels.”

The recent joint venture centered on Line 12 in Netanya. This is where Tempo fills its own mineral water and primarily Pepsi products – sugar-free Pepsi Max in particular – into non-returnable PET bottles. The line has now been replaced in two phases of construction. The first in 2017 focused on the packaging and palletizing section, during which an Innopack Kisters TSP with an integrated handle applicator and an Innopal PB palletizer with a capacity of up to 32,000 bottles per hour were installed. In 2020 it was then the turn of the filling section when the previous 25-year-old mechanical KHS filler with a maximum output of 18,000 bottles per hour and the old stretch blow molder from a competitor made room for the latest technology KHS has to offer: a stretch blow molder/filler block equipped with an InnoPET Blomax Series V and a modular Innofill PET DRV filler. An Innoket Neo roll-fed labeler and Innopro Paramix C blending system are also part of the line.

Besides the usual demands made of the quality, efficiency and performance of a new filling line, there were further challenges to be met. “The new line wasn’t just supposed to enable us to fill up to 32,000 1.5-liter bottles an hour with our carbonated products. A further requirement was that we could bottle at 20°C using 9 grams of CO2 per liter,” states Neori. In view of the company’s proximity to the sea, high humidity levels and ambient summer temperatures of 30 to 35°C, the products needed to be cooled for filling and then reheated to prevent condensation being formed in the packs. Another obstacle to be overcome was the restricted space: with a ceiling just four meters high, individual adjustments had to be made in order to accommodate the line and clean room air filters and to position the cap and preform infeed. What’s more, construction work in the limited area had to be reduced to an absolute minimum so as to keep interruptions to operation as short as possible. “KHS had the perfect remedy for each of these problems,” Neori states.

With its new PET line from KHS Tempo again lives up to its role as a pioneer. The stretch blow molder/filler block is the very first to combine a new-generation KHS stretch blow molder with a KHS filler. Another new path was also trod – after some initial hesitation – in a totally different area. “For the customer the KHS labeler was a first,” says Roche. “Despite a willingness to experiment, our contact at first found it hard to abandon the old and embrace the new with this machine. By employing all our powers of persuasion and quoting a number of successful reference projects, however, we were ultimately able to convince our client,” Roche claims happily. “In the end Haim was full of praise for the Innoket Neo – he was really enthusiastic about how easy it is to operate and how smoothly it runs.”

Productive even in lockdown

As in many other countries, the corona crisis threatened to sabotage the planned schedule in Israel, too. The country was one of the first to go into full lockdown – just as the engineers were about to ramp up the finished line. It quickly became clear that the installation team was now stuck on site and that no new service engineers could be flown in – a situation that naturally caused some uncertainty as nobody knew how long it would last. After much consultation the two parties mutually decided to carry on working. Tempo went to great effort to ensure that the KHS employees on site felt safe at all times despite them having to unintentionally extend their stay. In light of Tempo’s good care and support, the twelve people on the KHS team fully backed the aforementioned decision and made the best of the situation. For its part, Tempo used the time to have its employees trained by its guest engineers and with the help of online courses so that they would be able to quickly and independently solve any problems that might arise. Once the new line had been finally accepted in June 2020, the last KHS engineers left in Netanya were able to travel back home.

Despite the adverse circumstances production resumed on Line 12 just seven weeks after the old filling setup was shut down. The planned increase in capacity to 32,000 bottles maximum every sixty minutes was also realized in the previously ‘underutilized’ packaging and palletizing area, enabling the agreed overall equipment efficiency of 92% to be already surpassed during the acceptance test.

Accordingly, Tempo is very much the satisfied customer and already looking to the next joint project: a KHS canning line with a maximum output of 40,000 cans per hour. When asked what else his company is planning for the future, Daniel Beer replies, “We have to react to the significant changes we’re noticing in consumer behavior. We’re doing this by strengthening our core brands on the one hand and investing in innovation on the other – either by expanding our product range, introducing new brands or coming up with new forms of presentation.” In this respect he can rely on KHS to give him sound support in the future, too.

The KHS Group is one of the leading manufacturers of filling and packaging systems for the beverage and liquid food industries. The KHS Group includes the following companies: parent company KHS GmbH and numerous subsidiaries outside Germany, located in Ahmedabad (India), Waukesha (USA), Zinacantepec (Mexico), São Paulo (Brazil) and Suzhou (China). 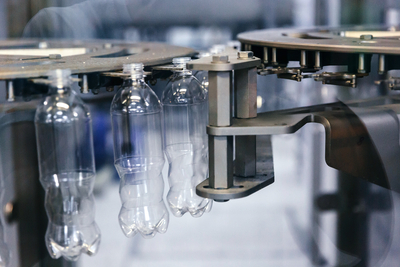 Part of the stretch blow molder/filler block is the transfer star that hands the finished bottles over to the Innofill PET DRV filler. 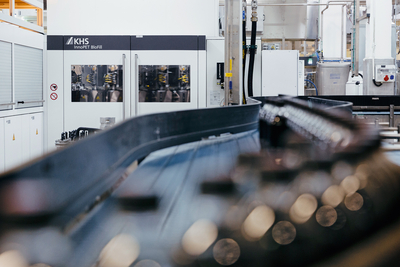 Scores on lower electricity consumption, top performance and use of less material: the KHS InnoPET Blomax Series V stretch blow molder, blocked with a filler for the first time. 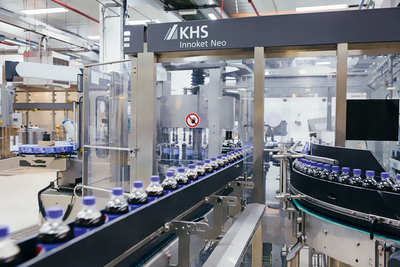 The KHS labeler was a first for Tempo; after initial hesitation to try something new, the company is now very pleased with its acquisition. 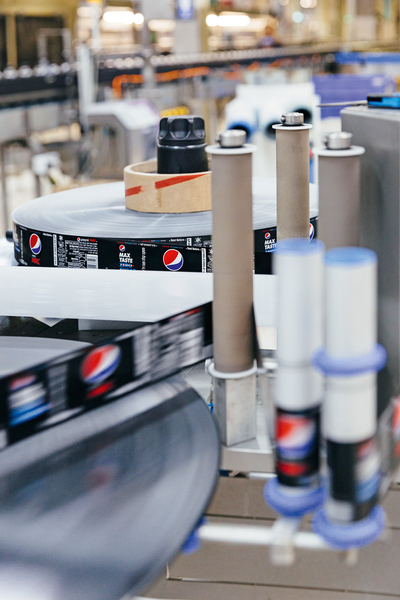 On the Innoket Neo roll-fed labeling machine from KHS PET bottles filled with sugar-free Pepsi Max are dressed with their characteristic black labels. 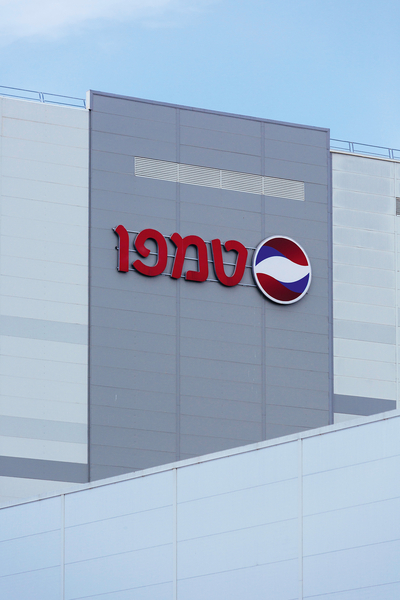 As the biggest producer of alcoholic beverages and the third-largest supplier of soft drinks Tempo Beverages is known to almost the entire population of 9.1 million in Israel. 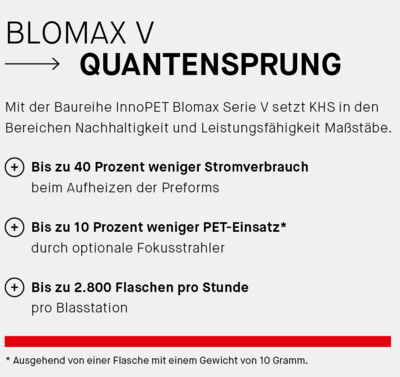 KHS sets standards in sustainability and performance with the InnoPET Blomax Series V. 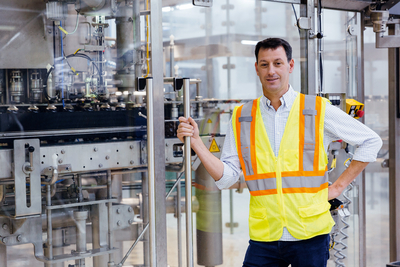 “We react to changes in consumer behavior with expansions to our product range or new forms of presentation,” explains Daniel Beer, deputy CEO at Tempo Beverages. 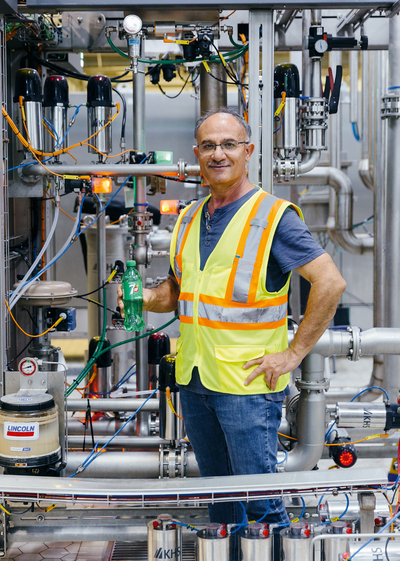 Haim Neori, electrical and process manager for Tempo Beverages, on KHS: “We value the first-class technology. It’s undoubtedly some of the best there is for filling.”