Even more flexible and hygienic: KHS can filler processes a broad spectrum of beverages and formats

Light, compact and convenient, the beverage can is experiencing something of a renaissance. More and more are being sold practically everywhere on the globe, with a rise in market shares to match. In Germany, for example, this number rose from 2.85 billion in 2017 to over 3.9 billion in 2019¹. The forecast is for further growth. As one of the world's leading manufacturers of filling and packaging equipment KHS has decades of expertise in this segment. The turnkey supplier has now expanded its tried-and-tested technology for both the high- and medium-capacity ranges.

Consumers have appreciated the advantages of the beverage can for decades, yet just recently the market share for cans has again showed a marked increase. There are numerous reasons for this. On the one hand, more and more energy drinks are being sold in cans; on the other, the craft movement is pushing this development by increasingly filling soft drinks, hard seltzer, beer and cider into this format.

KHS can also look back on a long tradition in this segment. The Dortmund engineering company entered the American can market over 50 years ago. Since then it has asserted itself with numerous new technologies and positioned itself as one of the world’s leading providers of canning equipment. The turnkey supplier is once again building on its decades of expertise to continuously further improve its tried-and-tested systems. A whole host of recent updates is designed to make the can fillers for the high- and medium-capacity ranges even more flexible and hygienic.

Back in 2014 the systems provider presented the first can filler in a totally new generation in the form of its Innofill Can DVD that can process up to 135,000 cans an hour. In 2017 KHS began specifically targeting SME canners with its compact Innofill Can C can filler that at the time was able to fill a maximum of 28,000 cans per hour.

Gentle can guiding and filling

Both machines offer many advantages and set standards – in hygiene, for example, thanks to the reduced cleaning effort; the extremely hygienic design and elimination of water lubrication in the filler carousel area prevent the open cans from being soiled. This allows cleaning intervals for exterior cleaning to be lengthened.

The most important upgrade in relation to hygiene on the Innofill Can DVD, however, is the pneumatic lowering device for the centering bells. Unlike on previous models these are no longer moved mechanically by rollers and cams. Instead, the proven pneumatic lifting and lowering motion found on the smaller Innofill Can C filler is now also being used here, explains Manfred Härtel, filling product manager at KHS. “With this system we reduce the number of fittings on the valve. On a filler, the rollers especially are subject to heavy wear. This means that a certain amount of abrasion can be caused above the open cans. With this now no longer an issue in the future, we’ve managed to again considerably increase what was already a very high level of hygiene.”

The lifting and lowering of the bells is intelligently controlled. As cans are becoming ever thinner as weight and materials are saved, it’s particularly important to guide and fill the containers as gently as possible. Pneumatic actuation allows the contact pressure to be adapted to suit different qualities of material. The once new technology has long outgrown its pioneer status and since proved itself on the market many times over; the recent technological upgrades have improved it even further.

“We satisfy high hygiene requirements, especially those made by sensitive beverages such as non-alcoholic beer, mixed beer beverages and flavored ciders,” Härtel continues. KHS can fillers not only display a high standard of hygiene inside the machine but also outside it – an aspect that’s becoming increasingly important in view of the trend towards beers and mixed beverages with less or no alcohol. “Our filling valves are famous for their hygienic properties, compact design and simple handling and maintenance,” states Härtel. This is especially beneficial to bottlers with a wide assortment of products, this requiring maximum flexibility of the technical equipment on the production line.

Made possible by Teflon

It’s worth taking a look at the details, both of the Innofill Can DVD and the Innofill Can C. One key prerequisite needed to achieve the required level of flexibility is the choice of the right sealing material for the expansion joint seal. “We continue to rely on Teflon here,” says Härtel. “This material can be excellently cleaned, gives our valve seals a much longer service life and doubles the change intervals with the added bonus of much shorter changeover times.” Looking at the range of materials on offer, however, what’s most important is that PTFE absorbs practically no flavoring substances – unlike standard seals made of elastomers such as EPDM2 that soak up liquid like a sponge during production. When there’s a drop in concentration with the next product in the filling sequence, the EPDM again releases these flavorings. In order to prevent this unwanted effect, production has to be scheduled by flavor. “The week thus starts off with a mineral water, for instance, and ends with the filling of a product with an intensive taste, such as an energy drink. With our filling valves the transfer of flavor is cut down to an absolute minimum, giving customers more freedom when planning,” Härtel smiles.

Furthermore, with the two revamped KHS can fillers beverages can also be filled when warm. This process becomes more significant particularly regarding the processing stages further down the line as it eliminates the formation of condensation. This more or less rules out the risk of cartons, trays and cans in six packs growing soggy, forming mold or being contaminated by microbes. Beer is filled at a temperature of up to 20°C and carbonated soft drinks at 22°C maximum. Juices can also be hot filled. This application is in increasing demand especially in the low- and medium-capacity range. “Our customers want flexible machines they can also realize new products on,” explains Härtel. “Our fillers can process widgets3, for example, that release nitrogen into beers low in carbon dioxide when the can’s opened. This produces a very creamy and compact head, just like a freshly tapped draft beer.”

The compact Innofill Can C can filler, too, is becoming increasingly popular with small and medium-sized breweries. KHS has therefore optimized it further. Here, the pitch circle has been enlarged from 720 to 1,800 millimeters, enabling machine outputs of up to 50,000 cans per hour to now be achieved on 60 filling valves. With this capacity the Innofill Can C can now also be integrated into lines with higher outputs, especially in combination with process engineering such as the Innopro Paramix C blending system, flash pasteurizer or CIP module. This means that beverages can also be processed and canned in the medium-capacity range on space-saving KHS systems right down the line. What’s more, the compactness of the Innofill Can C is particularly compelling. The filler, seamer, service module, cladding and control cabinet come pre-assembled on delivery so that the plug-and-produce system can go into operation more or less immediately.

In addition, the filling valves on the computer-controlled filling system are equipped with electromagnetic induction flow meters. They ensure uniform filling levels and that headspaces of exactly the same size are created in the cans. The energy-efficient drives also support a resource-saving production process. Additionally, as on all KHS machines the can fillers use servomotors and servodrives of the highest energy efficiency.

The Innofill Can C includes a can seamer from Ferrum AG, a company of international renown in this field. In addition to a system with three seamer spindles versions with six or eight are also available for higher outputs – these with automatic height adjustment.

The can fillers can also be supplemented by a Innoket Neo labeling machine, for instance, that dresses the containers with self-adhesive labels. “This can be useful if small batches of individual cans are also to be produced,” Härtel remarks.

1 https://de.statista.com/statistik/daten/studie/218957/umfrage/anzahl-der-verkauften-getraenkedosen-in-deutschland/
2 EPDM = ethylene-propylene-diene rubber.
3 Widget = a hollow plastic device about 3 cm in size filled with nitrogen during the filling process. When the can is opened, the widget releases the nitrogen into the beer. A compact head of foam is formed. It’s often used in English-style beers. 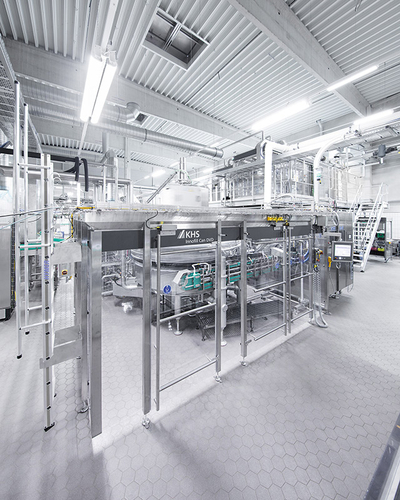 In the canning segment KHS offers beverage producers decades of expertise and ultramodern technologies. A series of upgrades now makes the high-capacity Innofill Can DVD can filler even more flexible and hygienic. 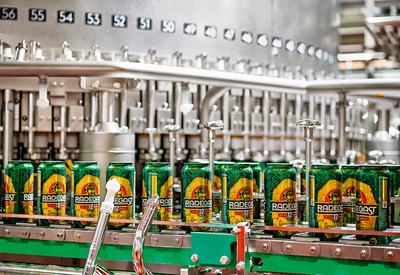 The first Innofill Can DVD to feature the new technological functions went into operation at Radegast Brewery in Nošovice in the Czech Republic in the spring of 2020. 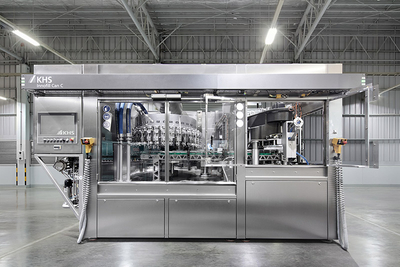 Still small but a lot more powerful: the Innofill Can C now processes up to 50,000 cans an hour. 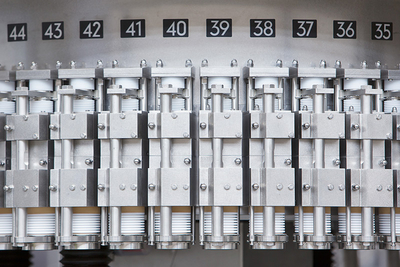 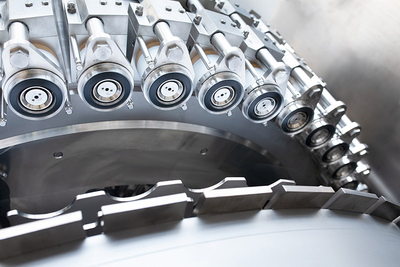 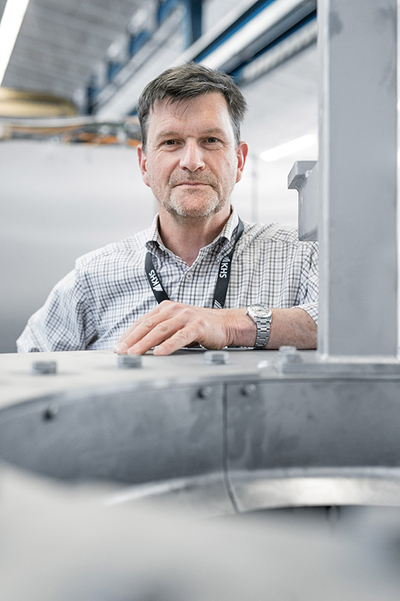