Shorter changeover times, lower energy costs and use of fewer resources: at the in-house KHS exhibition at the production site in Kleve, Germany, the company's product innovations and further developments met with great interest.

Download Article (10 MB)
Kleve, March 7, 2016 – Shorter changeover times, lower energy costs and use of fewer resources: at the in-house KHS exhibition at the production site in Kleve, Germany, the company's product innovations and further developments met with great interest. Under the motto of "Less is more" the systems provider presented its approach to greater economy and sustainability in the packaging process. One of the concepts to attract considerable attention was Nature MultiPackTM Powered by KHS, a PET or can pack which needs almost no packaging materials. Business on the Lower Rhine has developed so positively over the past few years that KHS plans to also invest in the Kleve site in 2016. "The great response to our plant engineering shows that we are able to recognize market demands early on and develop systems accordingly," says Norbert Pastoors, Head of Packaging Products Division. "We not only offer bottlers innovative and sustainable secondary packaging systems; the retail trade also benefits from the customer-friendly presentation of goods enabled by our developments." The interest in KHS' new or further developed machinery at the in-house exhibition staged at the KHS production site in Kleve was therefore considerable. Customers from various branches of industry, such as the food and beverage sectors, expressed great curiosity in the diverse ways of saving packaging materials and making their own production more efficient using KHS lines and machines. Nature MultiPackTM Powered by KHS in focus The technology behind the innovative, multi-award-winning Nature MultiPackTM Powered by KHS, which is marketed by NMP Systems GmbH, a wholly-owned subsidiary of KHS GmbH, attracted a great deal of attention. The system technology for this concept comes from Kleve, where one of the new machines was demonstrated at the exhibition. It produces packs of PET bottles or cans joined together by dots of adhesive only – without the need for any film whatsoever. The KHS Innopack Kisters product portfolio also had visitors convinced, with the packing and palletizing systems' flexibility and their ability to save on resources proving to be of particular note. The presentation of an innovative tray shrink packer demonstrated that just one system can be used to form packs in several different ways; the TPFO packer can combine containers on trays with or without film, on pads with film or simply pack them in film only. A presentation of the KHS Innopack Kisters DP DisplayPacker illustrated how products can be sold directly off the pallet, meaning that at the point of sale there is no longer any need to move individual packs or loose containers from the shipping pallet to the shelf. Packing and palletizing block concept for a filling and packaging system A new packing and palletizing block, consisting of a packer, buffer system and palletizer, showed that operators no longer have to change over machinery like this in order to process different formats. KHS has achieved this by removing the guides on the conveyors and establishing direct communication between the individual system components. The nozzle technology in the shrink tunnel also makes for efficient packaging processes. By adapting existing machinery KHS also enables line efficiency to be increased after initial installation. Various other services, such as the Bottles & Shapes™ program for designing PET containers, depicted how much customers can profit from KHS expertise besides the actual plant engineering. Success story to be continued with factory investments "Our in-house exhibition allows us to continue our story of success," emphasizes Pastoors. In the past few years business at the KHS production site in Kleve has already grown on average by more than 10% per annum. The company wants to continue this growth in its packaging segment in 2016, too. KHS is thus driving the development of its Kleve factory by making extensive investments in the site. Initial expansion of the production area has already been completed. The manufacturer will continue to expand its flow production unit for more efficient in-house production. Further extension of the site is planned for the near future. About the KHS Group The KHS Group is one of the leading manufacturers of filling and packaging systems for the beverage, food and non-food industries. The KHS Group includes the following companies, among others: KHS GmbH, KHS Corpoplast GmbH, KHS Plasmax GmbH and NMP Systems GmbH. KHS GmbH manufactures modern filling and packaging systems at its headquarters in Dortmund, Germany, and in Kleve, Bad Kreuznach and Worms. The KHS Group's PET expertise is pooled at KHS Corpoplast and KHS Plasmax in Hamburg, Germany, where light PET packaging and innovative coating systems are developed and produced. NMP Systems GmbH, a wholly-owned subsidiary of KHS GmbH based in Düsseldorf in Germany, designs and markets new, resource-saving packaging systems for PET bottles. The group has an international production and service network with over 4,600 employees. In 2015 KHS was awarded the Top 100 seal of approval for exceptional innovative power and outstanding innovative success among German SMEs. In 2014 the group achieved a turnover of €1.08 billion, The companies in the KHS Group are 100% subsidiaries of the MDAX-listed Salzgitter AG corporation. 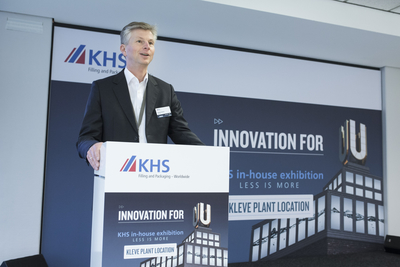 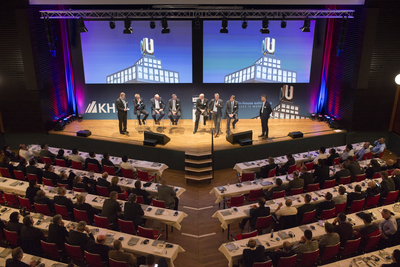 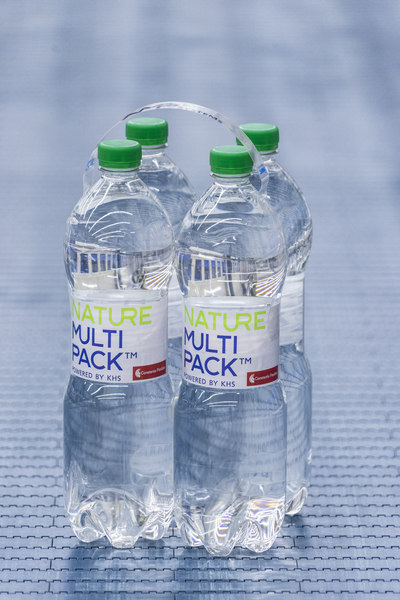 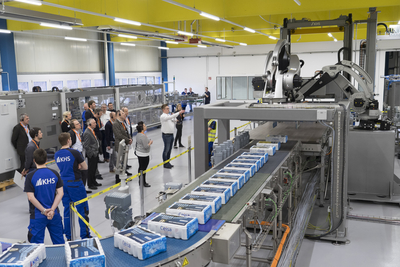 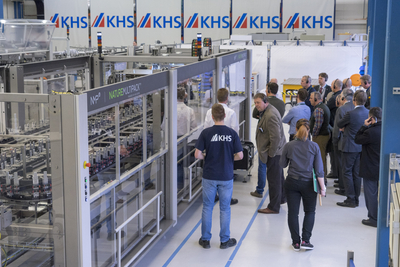 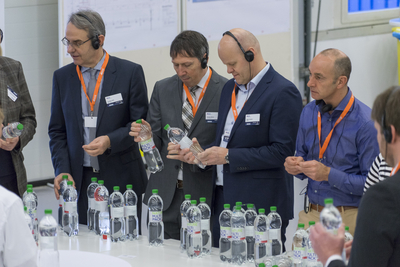 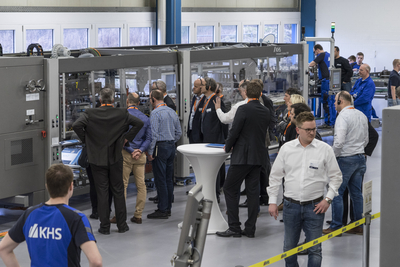