Keeping it in the family

One of six Coca-Cola HBC sites to have received a new canning line from KHS in 2020 is Edelstal in Austria. The system was delivered, installed and commissioned in a remarkably short time – and under quite extraordinary conditions.

Patrick Redl was virtually predestined for a career at Coca-Cola HBC in Edelstal in Austria from birth; four years ago he took over the role from his predecessor, following in the footsteps of his father who worked for Römerquelle for 37 years, in his last role as plant manager. Römerquelle is a mineral water plant that in 2003 was taken over by the world’s third-largest bottler of the Coca-Cola brand. Unlike Redl Senior, Redl Junior may not have been able to learn to swim at Römerquelle. “The swimming pool filled with mineral water next to the factory was sadly closed in 1971,” he explains. However, he says he still feels as though he grew up at the bottling plant as he spent so much time there as a child and teenager looking over his father’s shoulder.

Edelstal, a mere stone’s throw from the Slovakian border and the capital of Bratislava, is an idyllic village that’s home to just 800 people in the north of the Burgenland province. Hardly any tourists make it off the beaten track to this little place, idyllically nestled between two hills. At the entrance to the village stands Coca-Cola HBC Austria’s production and logistics center that covers an area more or less the same size as the whole of Edelstal. In order to gain an impression of just how large the plant is, simply note that the factory roofs sport one of the largest photovoltaic systems in Austria.

Since Römerquelle’s beginnings in the 1940s and its transition to industrial bottling plant in the 1960s, a lot has happened here. Following the takeover, the site was gradually expanded and modernized in the space of just ten years until it ultimately replaced the former Coca-Cola production facility in Vienna and a factory in neighboring Slovakia. Since 2013 almost all of the soft drinks for the Austrian market have been filled at and distributed nationwide from the state-of-the-art filling and logistics center in Edelstal. There are currently eleven production lines in operation in Edelstal: three of these bottle mineral water on a classic PET line, a glass line and an ultraclean PET line for sensitive products. On the other seven lines – three for PET, one for glass, one for bag-in-box and two for kegs – soft drinks, energy drinks, juice and syrup are processed. The latest milestone in the history of the production site is its first-ever canning line commissioned last year by KHS.

“Cans are a completely new category of primary packaging for us and metal is a material that we haven’t yet used to date,” Redl declares. “When designing the line, we found it very important that the technology is future-proof in all respects and that it gives us the greatest possible flexibility with regard to future market trends and product innovations.” Even at the initial development stage of the new line layout KHS had many constructive suggestions to make as to how this could be later extended with little effort – such as by adding a pasteurizer, an extra packaging machine or a half pallet processing option. “The line wasn’t quickly nicknamed ‘The Iron Unicorn’ for nothing. This implies that our ‘magical creature’ can do practically anything except sing and dance. We then called our production manager ‘Iron Man’ to match!” grins Redl.

The first of many challenges was the tight schedule. “In October 2019 we were tasked with installing and commissioning a canning line by June 2020,” the plant manager recalls. “This was ambitious timing – not least because of the official approvals needed. Just three days after the go-ahead we presented the project to the local government so that the necessary resources could be blocked there.”

The project was extremely complex primarily because it affected the entire plant. The new line was to be set up in an area that had previously accommodated the raw materials warehouse. This was then to move to where the stretch blow molding machines had formerly stood. In turn, a palletizer had to be relocated to make room for the blow molders. “It was like a chain reaction and required some extremely careful planning,” Redl remembers. “We started the switch in November. The warehouse kept us busy until May because there was less space available at its new location. We therefore installed a moving shelf system of a type otherwise used to archive documents.”

Before KHS could deliver the machines for the new canning line, the old warehouse had to be revamped. This entailed laying a completely new floor, repiping and rewiring it and installing ventilation and lighting systems. “These were just a few of the countless preparations that had to be made before things could really get going. However, in the end it all went like clockwork.” This was despite the fact that another complication had cropped up in the meantime. “We felt we were well on track to meet the deadline in June,” Redl reminisces. “We of course had an eye on what had been going on in China since January but hoped that it would somehow pass us by. But then, as we all know, corona hit Europe and reached Austria, putting us in a position that definitely didn’t help. Nevertheless, we didn’t doubt for a minute that we’d be able to keep to our schedule. This gave us a real sense of team spirit and agility. And then when we did actually manage to complete all of the preparations by the appointed date, I think even KHS was slightly surprised!”

Right from day one, the top priority was to protect all employees, the KHS installation team and all other subcontractors busy in Edelstal. The restrictions imposed as a result naturally didn’t make work any easier. Distances had to be kept to and people separated from one another. “Company headquarters really helped us to set up a safe environment – not least by providing us with masks that to start with were hard to come by. But we always found a solution,” states Redl. A safe space was created where all those involved were able to fully concentrate on the installation of the line. At the end of the day, congratulations were due all round because there wasn’t a single case of Covid-19 in the team during the entire course of the project.

Ultimately, despite the adverse circumstances the deadline for the start of beverage production could be met. This is also thanks to the efforts of the committed crew made up of personnel from both Coca-Cola HBC and KHS, believes Redl. “They did fantastic work every single day. What I found most important was that there was permanent coordination, the feeling that everyone was working closely together from planning through preparation to installation – and that they still are. I at least am extremely proud of the fact that we managed it all under these conditions.”

Throughout 2020 Coca-Cola HBC had KHS install and commission a new canning line in a total of six different countries. One reason for this investment was the increased demand for the aluminum containers. “Cans are becoming more and more popular, especially in Europe,” explains Theodoros Kappatos, group engineering manager of Coca-Cola HBC. “As a beverage leader on many European markets, we of course need to respond to this trend. What’s more, our new canning line has also enabled us to develop a strategy with which we can supply flavored Römerquelle water in aluminum cans.” Another was that the new procurements are part of the bottler’s supply chain strategy. One of its goals is to modernize its production lines, especially when it comes to replacing older systems with new, more efficient and more powerful technology with lower consumption values.

Coca-Cola HBC enjoys a long and trusting partnership with KHS. “We awarded KHS this contract because the company is a great partner to us,” Kappatos emphasizes. “This not only applies to this container format but to our entire system portfolio. Just recently, we commissioned a PET line at our factory in Kiev together, for example. We regard KHS as a strategic key supplier at our side, a partner who understands and meets our demand for efficient, high-quality lines and machines. This in turn enables us to satisfy the needs of our customers and consumers. We especially value that our cooperation not only focuses on innovative concepts but that unconventional ideas are heard and realized. On the basis of this we achieve improved functionality and simpler, less expensive maintenance processes, for instance.”

Patrick Redl in Edelstal is also extremely pleased – and not just with the high speed of the line that fills up to 90,000 cans an hour. “I find this mind-blowing! This line runs twice as fast as our second-quickest line!” He’s also bowled over by how quickly the new line was brought up to capacity compared to all of the company’s older machines. He’s particularly happy with the introduction of a new technology that enables can six-packs held together by the innovative KeelClip™ cardboard solution to be produced. Reducing the use of plastic in secondary packaging is one of Coca-Cola HBC’s World Without Waste commitments. “We were one of the first in the world to get these totally new machines up and running,” he ascertains. “We managed this by using state-of-the-art digital solutions like smart glasses. After all, engineers from the manufacturer in the US weren’t able to leave the country.” KHS provided valuable support here, contributing plenty of expertise when it came to integrating the machine into the line – just as you’d expect in a partnership like this.

When, in his free time, Redl visits his father and sits down for a meal with the family, it’s still a bit like taking part in a meeting, Redl Junior says at the end of our interview. But with all the experience that his predecessor may have over him, there’s one thing Redl Senior didn’t manage during his career. “Being the first plant manager to fill Römerquelle mineral water into cans is quite a unique achievement,” he states, laughing.

In 2020 Coca-Cola HBC procured a total of six canning lines from KHS. A package of six similar lines was ordered, with regional differences in capacity, packaging and single machines. 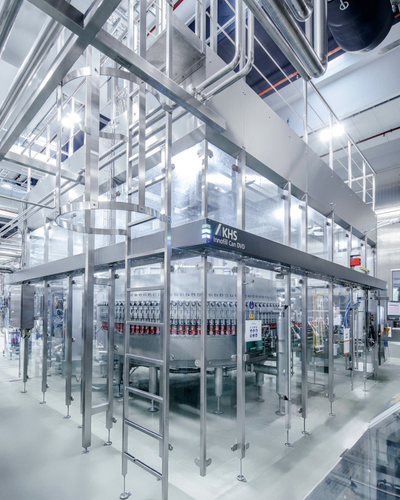 The heart of the line is the KHS Innofill Can DVD can filler that in Edelstal processes up to 90,000 cans per hour. 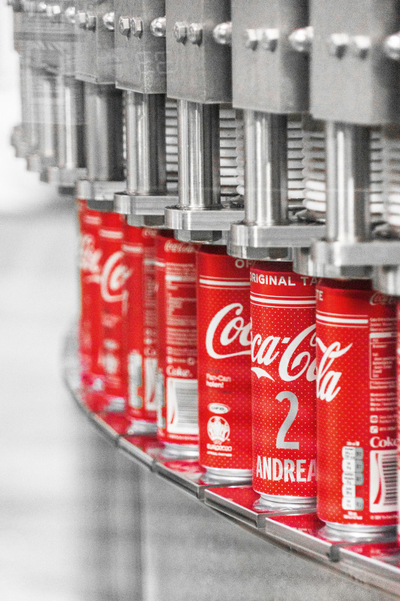 On this close-up of the can filler the PTFE expansion joints are clearly visible. Part of the gapless bell guide, they absorb practically no flavoring substances. 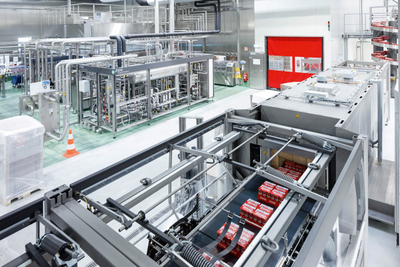 At the back is the Innopro Paramix C dosing and blending system and in the foreground the Innopack Kisters TSP tray shrink packer. 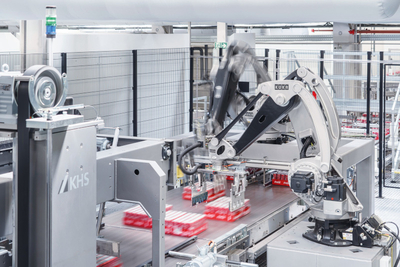 The packs are formed into layers and readied for palletizing with the help of gripping robots. 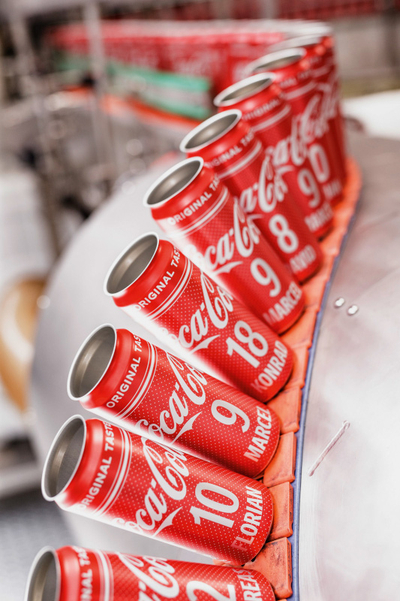 En route to the filler: beverage cans printed with the first names of Austria’s national soccer team for Euro 2020 in the summer of 2021. 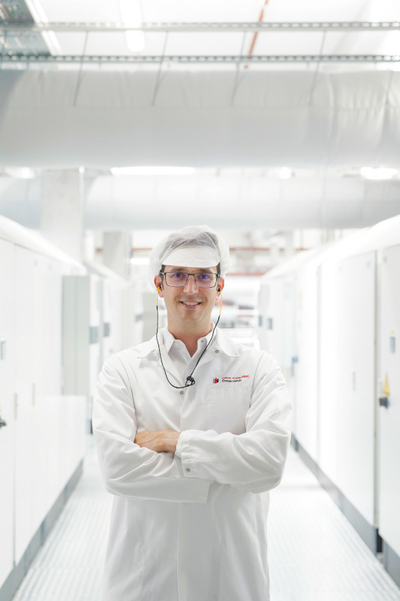 Plant manager Patrick Redl has known the factory since he was a child: four years ago he followed in his father’s footsteps here. 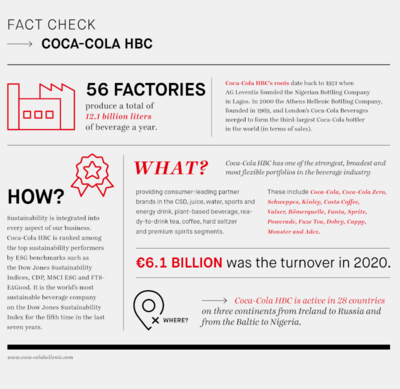