KHS helps Portuguese brewery on its way to a sustainable future

Dortmund/Vialonga, October 7, 2019 – Reliability, environmental friendliness and viability for the future are values held by KHS that Portuguese brewery Sociedade Central de Cervejas E Bebidas S.A. (SCC) greatly appreciates – and has done for decades. The commissioning of the new glass line is a further milestone in the long-term partnership between the two companies. By employing up-to-the-minute technology from the systems supplier the beer producer from Vialonga has minimized both its water and energy consumption and its CO2 emissions.

SCC has placed its trust in plant technology from the Dortmund systems specialist for more than 34 years. “Back then we heard that KHS was an exemplary supplier of future-proof filling systems,” says Nuno Pinto de Magalhães, head of Corporate Affairs at SCC. Over the decades a close and trusting relationship has been built up. “KHS has always convinced us with its excellent state-of-the-art technology and outstanding service,” smiles Pinto de Magalhães.

First choice for technology and service

The brewery, which is chiefly famous for its Sagres brand, has thus continuously invested in new lines and systems in the last years, including a keg line in 2016. “Today, all of the key filling and packaging machines in Vialonga have been constructed by KHS,” reports Frank Schneidermann, sales director for Portugal for the German engineering company.

At the beginning of 2018 he and his team were awarded a contract for a new glass line. “After 20 years the old one simply wasn’t state of the art anymore regarding its energy consumption,” he explains. The initial situation was challenging as the brewery could only fill its one-liter bottles on this particular line. Therefore the old line had to be dismantled and the new glass line installed very quickly in order to keep production loss down to a minimum during this time. “Thanks to the extremely precise advance planning and professional teamwork machine replacement went very quickly and without any hitches,” states Jose Luis da Mata Torres, supply chain director at SCC.

A KHS Innofill Glass DRS glass bottling machine forms the heart of the new line. With its computer-controlled filling system the Heineken subsidiary has an increased output of up to 55,000 0.33-liter bottles per hour. The multiple-format system can process bottles holding between 0.25 and 1.0 liters. The hygienic QUICKLOCK fast-acting locking system cuts changeover times down to a minimum.

The proven filling system’s low consumption of resources is also compelling. The new vacuum pump reduces the amount of water used by up to 96%, for example. “That’s more than 32 million liters of water a year,” claims Schneidermann. The new line further saves on resources with its low energy consumption and CO2 emissions which amount to up to 12,600 kWh or 80 metric tons less per year than on a standard setup.

In addition to the DRS the new glass line also includes a rinser and two closure systems blocked with the glass filler. The brewery, founded in 1934, can now seal its bottles not just with crown corks but also with roll-on and ring-pull closures (pull-tab caps). The brewers also invested in a tunnel pasteurizer, labeler and wrap-around shrink packer from KHS. A palletizer and depalletizer round off the line. “With our new glass line we’re perfectly set up for the future, regarding both efficiency and sustainability,” Pinto de Magalhães concludes.

The beer market in Portugal is very important for KHS. “About 90% of all beer is filled on our machines,” Schneidermann reports. The turnkey supplier works closely with Portugal’s biggest breweries, with which SCC is also affiliated. This is why Dr. Johannes T. Grobe, CSO for KHS, and Portuguese deputy prime minister and minister of the economy Dr. Pedro Siza Vieira were both present at the opening ceremony for the new line. In his speech Dr. Grobe praised SCC as “a company which perfectly masters the balancing act between tradition and future-oriented technology”.

KHS GmbH is one of the leading manufacturers of filling and packaging systems for the beverage, food and non-food industries. The KHS Group includes the following companies: KHS GmbH, KHS Corpoplast GmbH and numerous subsidiaries outside Germany, located in Ahmedabad (India), Sarasota and Waukesha (USA), Zinacantepec (Mexico), São Paulo (Brazil) and Suzhou (China).

KHS GmbH manufactures modern filling and packaging systems for the high-capacity range at its headquarters in Dortmund, Germany, and at its factories in Bad Kreuznach, Kleve and Worms. The group's PET expertise is pooled at KHS Corpoplast GmbH in Hamburg, Germany, where innovative PET packaging and coating systems are developed and produced. KHS is a wholly owned subsidiary of the SDAX-listed Salzgitter AG corporation. 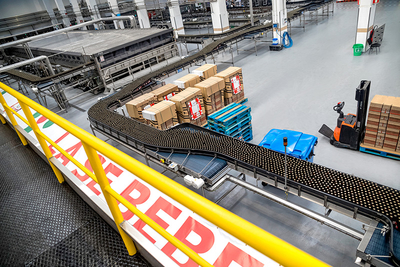 The new glass line from KHS is distinguished by its low consumption of water and energy. CO2 emissions are also lower. 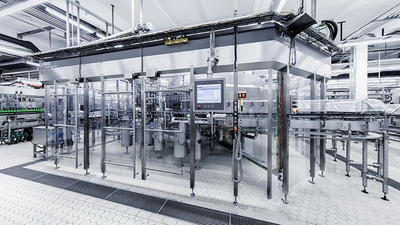 On its new KHS Innofill Glass DRS glass bottle filler the Portuguese brewery processes up to 55,000 bottles per hour. 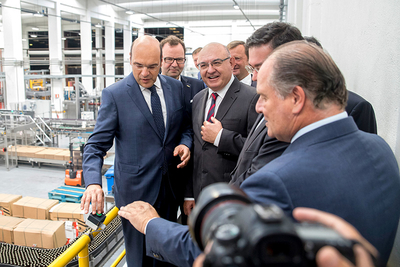 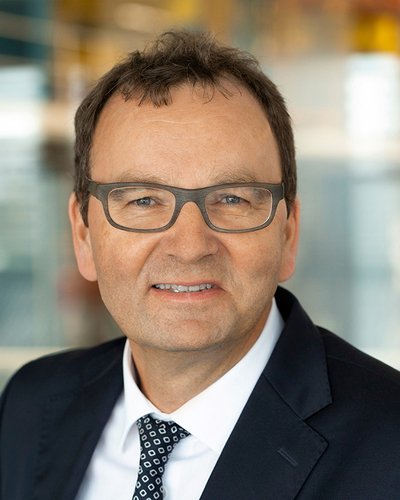 In his speech marking the opening of the new line Dr. Johannes T. Grobe, CSO for KHS, honored the long-term, trusting partnership between SCC and the Dortmund engineering company. 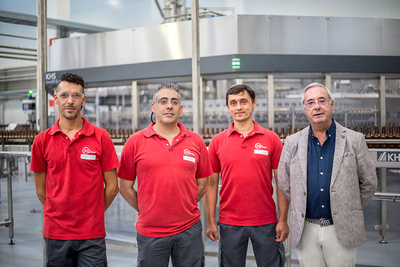 The old line was replaced by the new one without any problems – not least thanks to some very professional teamwork. 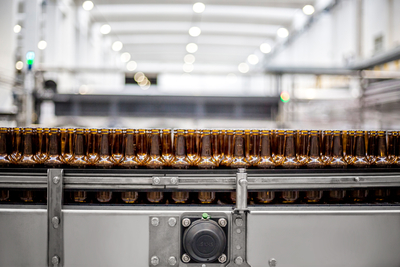 SCC is one of the largest breweries in Portugal. Its main brand Sagres is well known way beyond the state boundaries. 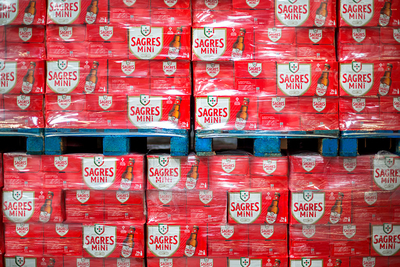