Sustainable, consumer friendly and gentle on resources: Nature MultiPack™ from KHS combines beverage containers with easy-to-remove dots of adhesive instead of shrink film to form stable packs, thus saving up to 90% in packaging materials.

Dortmund, March 3, 2021 – Sustainable, consumer friendly and gentle on resources: Nature MultiPack™ from KHS combines beverage containers with easy-to-remove dots of adhesive instead of shrink film to form stable packs, thus saving up to 90% in packaging materials. The ecofriendly packaging alternative is now also available for the high-performance range.

Originally developed by KHS for packs of PET bottles, the Innopack Nature MultiPack™ packaging machine was initially designed for a capacity range of up to 45,000 bottles per hour plus 20% overcapacity. It quickly became clear, however, that the sustainable concept of holding beverage containers together with dots of adhesive instead of shrink film to form a pack that’s easy to transport and easy for consumers to ‘open’ was also of interest to the canning segment. In close cooperation with the Carlsberg Group, the system has now been successfully introduced in several European countries as packs of four, six and eight cans under the name of ‘snap pack’.

As in the high-performance range cans are usually filled at a rate of over 100,000 containers per hour, to date the Innopack Nature MultiPack™ was too slow. Placing two machines on a line as for Carlsberg was therefore only a temporary solution: firstly, because the footprint was then twice the size (one machine is almost 25 meters long) and secondly, because this doubled the cost of investment. Christoph Georg von Aichinger, global product account manager for Nature MultiPack, thus stresses how important it is to not only take the cost of investment but also the day-to-day operating costs into account during the decision-making process.

According to in-house calculations, Nature MultiPack™ scores at €20 to €25 per 1,000 packs as opposed to cardboard carriers that cost up to €50 for the same number of packs. “The higher cost of investment then of course pays off over a certain period,” explains von Aichinger. “At full capacity the system can even pay for itself in the first year.”

In order to perfectly accommodate the requirements of the beverage industry, KHS now also offers the Innopack Nature MultiPack™ for the high-capacity range. Running at overcapacity, it can process up to 108,000 containers per hour, with a maximum of 90,000 containers produced every 60 minutes at nominal capacity. Depending on the format, the machine outputs up to 450 packs of four a minute.

This boost in performance has been made possible by a whole series of technical innovations explained by Dr. Matthias Caninenberg, head of Nature MultiPack Technology at KHS. “The list of innovations starts with the conveying speed which we’ve increased from 51 to 72 meters per minute compared to the machine’s predecessor. So that we didn’t have to double the speed – which would have incurred a considerable amount of extra effort – the pitch was decreased on the unscrambler module.” This reduces the distance between the containers from 114.3 to 90 millimeters and even down to 80 millimeters following the gluing process. “This allows more units to run through the machine and we get the performance we want,” Dr. Caninenberg continues.

In the orientation module KHS has revamped the entire carousel: instead of four this now has six drives that no longer rotate four but three plates apiece. This change makes time for alignment of the containers. Here, a camera takes 400 images of a container on the first reference run while this is turned 360° about its longitudinal axis. In production the container is photographed just once. A fast algorithm compares this single image to the 400 taken previously and in doing so determines the current position of each single can or PET bottle. This is then used to calculate any necessary correction to the container’s position, performed by the activated motor in a matter of milliseconds until the container is aligned as required. “This is important with regard to the point of sale, for instance, if the containers are to be arranged in the pack to form a single image,” Dr. Caninenberg declares.

In the next module application heads ‘shoot’ half the dots of adhesive onto the left and right can or bottle respectively. During application the container itself stands completely still for a fraction of a second so that the adhesive is applied with the utmost accuracy. The carousel has been redesigned to this end and the position of the application heads adjusted slightly.

Perfect results thanks to pioneering technology

Once the dots of adhesive have been applied, the containers are passed on to the compression module. “This is where the packs are formed by the containers being pressed against one another. This takes less than a second as long as the adhesive is soft,” explains Dr. Caninenberg. This aspect of the further development of the machine for the high-capacity range took up the most time and energy to bring the output up to 90,000 or 108,000 bottles or cans an hour maximum. Here, KHS dispensed with transfer stars with fingers and switched the conveyor system over from chains to toothed belts. The new modular design enables the curing segment to be halved and the entire machine to be shortened by three-and-a-half meters. The effort was well worth it – and not just for the size, Dr. Caninenberg believes. “The packs are joined more gently and flexibly and the transfer process is subject to lower tolerances.”

After compression any packs where a dot of adhesive is missing or incorrectly applied are channeled out. “However, the rate here is so low that it’s hardly worth mentioning,” emphasizes Dr. Caninenberg. This can be further improved by an optional air drying module that makes sure that there is no more condensation or condensation water in the machine – an important factor when it comes to the quality of the gluing process.

Another special feature awaits the packs in the handle applicator module once they have been split into three lanes and turned through 90°. “Here, we’re using a model developed by KHS for the first time that manages up to 150 packs a minute. As there are three applicators installed next to one another, the output amounts to 450 packs per minute; with packs of four, that’s a maximum of 108,000 containers that can be processed every hour.” Alternatively, the new system can also produce up to 300 packs of six or a maximum of 225 packs of eight containers per minute.

Flexibility is also writ large with respect to the footprint of the packaging machine. “If there are problems with the length of the machine, in the middle the layout can also be turned through 90 or 180°,” says Dr. Caninenberg. This means that the further developed Nature MultiPack™ system for the high-performance range can also be adapted to suit more complex space requirements.

One important aspect for sales especially is that the innovative Nature MultiPack™ packaging concept touches on many areas of a beverage bottling plant: from purchasing through production to sales and marketing. “The big players have a strategic agenda that they generally pursue three goals with,” says von Aichinger. “First comes sustainability, this achieved by saving on energy and water consumption and reducing the carbon footprint; second is the desire for growth; and third is the need to generate as high a margin as possible. Nature MultiPack™ is a system that serves all of these three purposes.” Von Aichinger knows that innovations of this kind hold increasing appeal for medium-sized, owner-managed companies, too. “Their flat hierarchies allow them to be more flexible in their decision-making,” the KHS salesman comments. “We saw this recently with the Martens brewery in Belgium. We basically agreed on a deal there after just a few meetings.”

The KHS Group is one of the leading manufacturers of filling and packaging systems for the beverage and liquid food industries. Besides the parent company the KHS Group also includes numerous subsidiaries outside Germany, located in Ahmedabad (India), Waukesha (USA), Zinacantepec (Mexico), São Paulo (Brazil) and Suzhou (China). 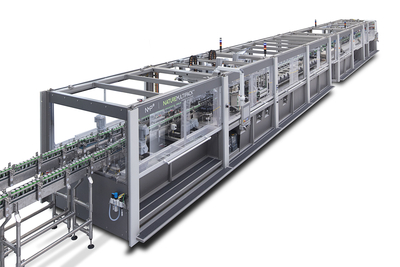 The Innopack Nature MultiPack™ machine from KHS is now also available for the high-performance range with an output of up to 108,000 cans or PET bottles per hour. 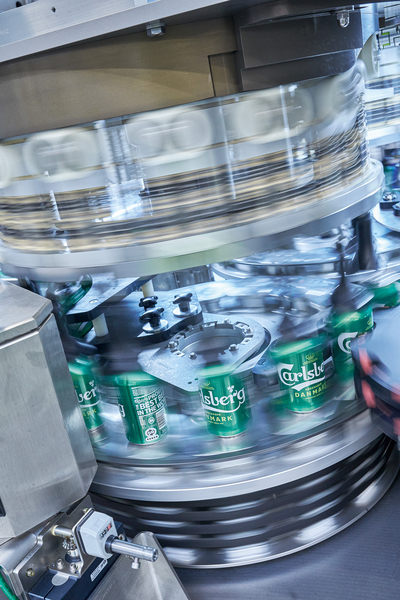 In the packaging machine’s orientation module the beverage cans are aligned in a matter of milliseconds so that the containers in the pack form a single image. 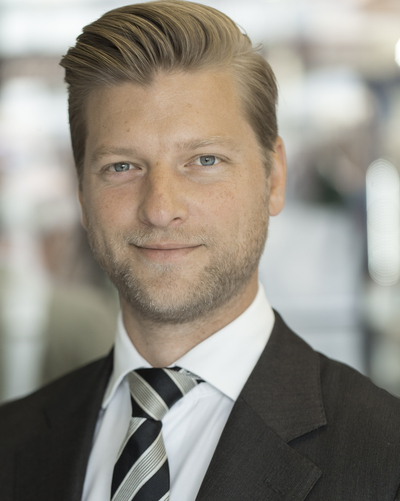 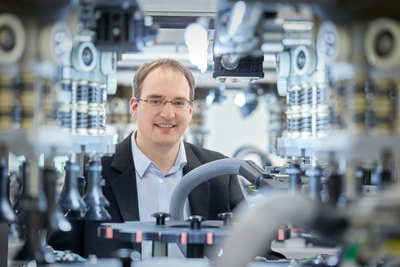 “If there are problems with the length of the machine, in the middle the layout can also be turned through 90 or 180°,” states Dr. Matthias Caninenberg, head of Nature MultiPack Technology at KHS. 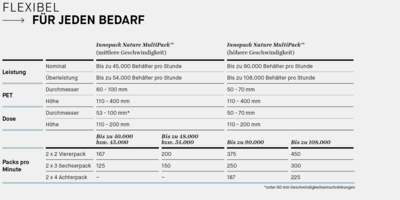 This graphic shows which benefits increasing the capacity of the Innopack Nature MultiPack™ machine has. 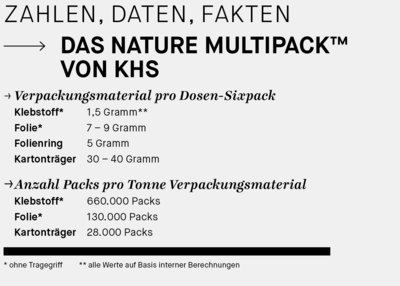 Nature MultiPack™ from KHS is convincing with its low consumption of materials – also in comparison with other packaging forms.