The calls for environmentally-friendly packaging are growing louder. With its current project the KHS Group is again addressing precisely this issue: together with traditional Martens Brewery in Belgium the turnkey supplier has made the portfolio for a German discounter more sustainable.

Dortmund, August 11, 2020 – The calls for environmentally-friendly packaging are growing louder. With its current project the KHS Group is again addressing precisely this issue: together with traditional Martens Brewery in Belgium the turnkey supplier has made the portfolio for a German discounter more sustainable. Karlskrone beer is now to be sold as a film-free KHS Nature MultiPack™ of six – in redesigned 0.5-liter PET bottles made entirely of recyclate. FreshSafe PET®, the patented KHS Plasmax coating process, also provides optimum product protection and a long shelf life. With this hat trick, together with its established partners KHS is implementing its strategy of reducing packaging waste and promoting a closed recycling loop on the market.

As part of its sustainability strategy, one of the goals the German discounter has set itself is to use 30% less packaging material for its own brands by 2025 by doing away with shrink film, for example. Moreover, recyclable packaging is to be introduced in this segment by 2022. The KHS Group and Martens Brewery have played a major role in the first step in the switch to a sustainable portfolio. The brewery and Dortmund engineering company have been working closely together on the development and establishment of disruptive technologies for decades. “We enjoy a long, strategic partnership based on mutual trust. Our current project is sending out an important message,” says brewery boss Jan Martens. “The development of this ecofriendly packaging shows that with the commitment of all those involved sustainable systems can be successfully established on the market,” adds Edgar-George Petsche, head of Market Zone Europe/CIS at KHS.

Martens fills its beverages on a number of KHS machines – into cans, glass bottles and – as in this case – PET. The two companies’ many years of partnership has facilitated the quick market launch of the new style of packaging. The brewery invested, among other things, in an InnoPET Blomax stretch blow molder and an InnoPET Plasmax that coats the insides of the bottles with a wafer-thin film of chemically pure glass. The existing line has now been extended by a Nature MultiPackTM machine.

The new system joins beverage bottles together not with shrink film but with dots of adhesive to form a stable yet easy-to-separate pack. This enables up to 90% in packaging to be saved. Compared to the pack variant currently on the market comprised of film and weighing in at 7.5 grams, the novel setup uses just 1.5 grams of adhesive. A convenient carrying handle, which helps to keep the pack stable, and individual alignment of the respective containers also communicate effective marketing messages. The beverage producer saves up to 67% in energy during production compared to shrink wrapping the containers in film as the material does not have to be heated.

Furthermore, according to Petsche CO2 emissions are slashed by 70% with regard to the overall ecobalance. “The entire production process is significant here – from the manufacture of the film through sales to disposal.” With the new pack Martens also does without trays. This saves raw materials such as paper and cardboard without impacting the pack’s stability. Should bottlers and retailers require, however, trays can be easily incorporated into the process.

New generation with increased capacity out this year

At the moment up to 40,000 PET bottles an hour can be processed by Martens as Nature MultiPacksTM. The modular machine design allows bottles to also continue to be wrapped in film, Petsche emphasizes; he sees economic benefits for bottlers if they switch their portfolio over, however. “As fewer raw materials are used, investing in the NMP system pays off in less than three years.” Thanks to the expansion of its production capacities, KHS is able to meet a growth in demand. The systems provider is also to launch a new generation of NMP machines to market this year for the high-capacity range of up to 108,000 containers per hour.

After Evian and Carlsberg the Belgian brewery is a further partner to rely on this KHS technology and successfully establish its product on the market. “We see ourselves as visionaries and technological pioneers,” Jan Martens smiles. “Opting for this system is also an investment in the protection of the environment.” In addition to using Nature MultiPackTM and FreshSafe PET®, those responsible at the company have also consciously gone for a fully recyclable bottle made of 100% rPET, even though virgin PET is less expensive. “With this hat trick we’re taking a clear stand for the protection of the environment. There’s no system to compare with this on the market,” states Martens, who sees great potential for increased eschewal of shrink film in particular. “For all of the stakeholders in the industry – from retailer to bottler – the issues of sustainability and recyclability are becoming ever more important with respect to both primary and secondary packaging. Together with KHS we provide suitable systems in the endeavor to reduce, reuse and recycle plastic.”

Martens Brewery is a family-owned company from Bocholt, Belgium. Andriaan Geerkens founded the brewery to supply the village inn in 1758. The present-day owners Jan and Fons Martens represent the company’s eighth generation of brewers. The brewery has an annual output of over three million hectoliters and has become one of the main players on the Belgian and international beer market. Much of its produce is destined for export and marketed as an own brand. 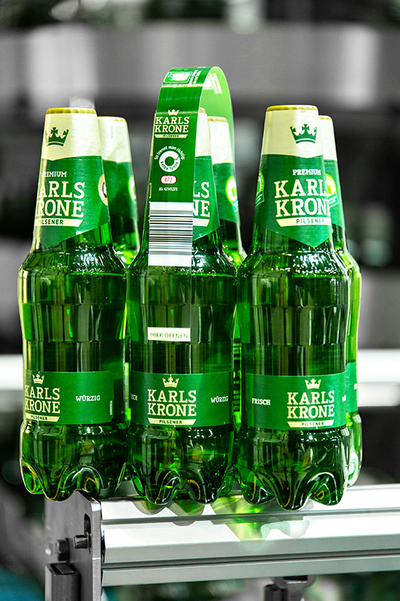 The Karlskrone brand produced by Belgian Martens Brewery is now to be sold as a film-free KHS Nature MultiPackTM of six – in redesigned 0.5-liter PET bottles made entirely of recyclate. 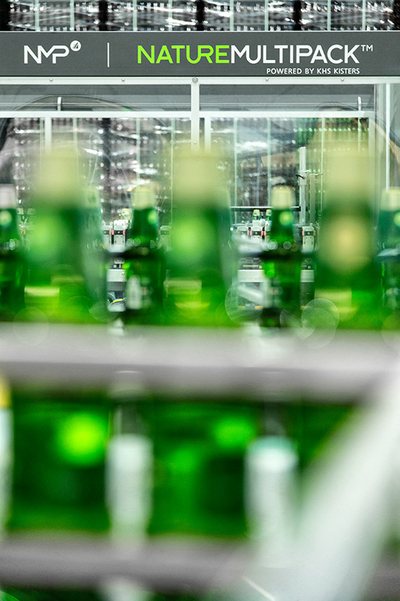 Martens’ Nature MultiPackTM machine processes up to 40,000 PET bottles an hour. This year KHS is to launch a new generation of NMP machines to market with a capacity of up to 108,000 containers per hour. 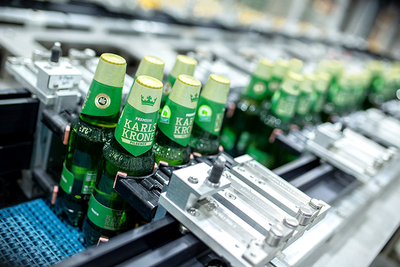 Up to 90% in packaging can be saved with the Nature MultiPack™. Compared to the pack variant currently on the market comprised of film and weighing in at 7.5 grams, the novel setup uses just 1.5 grams of adhesive. 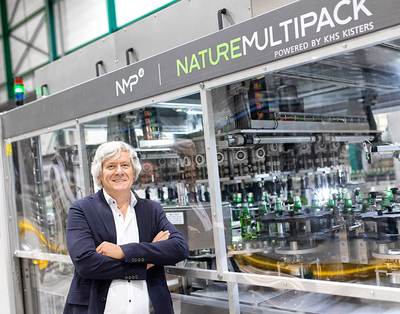 Jan Martens, owner of Martens Brewery in Belgium: “For all of the stakeholders in the industry – from retailer to bottler – sustainability is becoming ever more important. Together with KHS we provide suitable systems in the endeavor to reduce, reuse and recycle plastic.”