For years, it seemed practically impossible to make oval PET bottles with any great degree of precision. The big challenge was to homogenously distribute the material throughout the irregularly formed plastic container. The breakthrough ultimately came with the introduction of sophisticated preferential heating technology. Henceforth, it was possible to produce complex container shapes of an optimum weight with the help of PET stretch blow molding machines. Dortmund machine and systems manufacturer KHS has used this energy-efficient process in its systems since 1997. The turnkey supplier has now integrated preferential heating into its latest generation of stretch blow molders, the KHS InnoPET Blomax Series V.

Developed in the early 1970s, the PET bottle very quickly embarked on a remarkable march of triumph across the globe. Its light weight and excellent barrier properties make the plastic container the ideal form of packaging for products found in everyday use. It is thus no surprise that in the beverage and food industries and home and personal care sector the PET bottle is one of the most popular packaging options. Plastic receptacles also offer clear added value at the point of sale: as they can be easily formed when heated, these containers can now be made in practically any shape, whether this be round, oval or rectangular.

However, more complex bottle bodies make especially high demands of the production process. The even distribution of the plastic material in particular is a challenging task that tests conventional stretch blow molders to their limits. These heat preforms evenly so that on non-round containers the areas that first come into contact with the blow mold cool down sooner. The result is that the PET hardens at these points faster and the material is distributed unevenly. Only the use of a specially developed heating system known as preferential heating also enables the wall thickness of PET bottles with more complex shapes to be radially distributed with any precision – and thus bottles with an optimized weight to be produced.

KHS has used the energy-efficient preferential heating method on its InnoPET Blomax stretch blow molder series since 1997. The preform is first heated in the standard heater where the container constantly rotates to ensure that it is evenly heated. This rotation is deliberately interrupted in the downstream preferential heating module so that only certain areas of the PET preform continue to be actively heated from two sides. The distance of the preforms to one another is kept as small as possible, thus significantly lowering the machine’s energy consumption. This is also assisted by KHS’ highly efficient NIR heating system. The precise alignment of the heating profile also yields a higher quality.

Thanks to preferential heating, the PET material is evenly distributed in the container wall across the oval cross section. This process ensures that wall thicknesses are identical and is thus largely instrumental in securing the stability and quality of the container. At the same time users save significant amounts of plastic, for without preferential heating the uneven distribution of materials would have to be compensated for by increasing the wall thickness. In the final process step the bottle is optionally aligned by its shape and fed into the conveying system.

KHS first used the preferential heating method in its InnoPET Blomax Series II, with the procedure also available for successor models Series III and Series IV. Around 60 machines are currently on the market, with most of them in Europe and North America. Customers primarily include companies in the home and personal care sector who manufacture products such as laundry and dishwashing detergents, soaps, shower gels and shampoos. This special heating method is also used in the manufacture of containers for liquid foods such as ketchup, honey, mustard and oil. Converters are another example of businesses who trust in this KHS technology.

German consumer goods manufacturer Henkel most recently invested in a KHS stretch blow molder with preferential heating for its Fa body care brand. Further machines are being used by the company around the world to produce fabric softeners and household detergents. This investment has allowed Henkel to optimize its production processes, with the company now manufacturing PET containers cost-effectively in house. This makes production plans more flexible. At the same time, fewer resources are used as trucks no longer have to travel lengthy distances.

The joint cooperation is a showcase project – particularly when it comes to sustainability and the use of resources. The customer’s 250-milliliter bottle, for instance, now consumes 14% less material than the previous versions while maintaining the required bottle quality. The bottles also consist of 100% recycled PET.

The team of experts at KHS is currently further developing the preferential heating module so that it is compatible with its latest generation of stretch blow molders, the InnoPET Blomax Series V. Here, the module is integrated into the usual heater as standard. The aim is to keep the heater box the same and that only the length of the full heater changes in relation to capacity. Standardizing this feature considerably reduces the range of parts needed and makes maintenance and inspection much easier. Delivery times for the machine and its components are also shorter as a result of these optimizations. In addition, the system is more flexible as it can now process both round and oval containers as an optional function.

Furthermore, the KHS team has upped the performance to a maximum 2,000 bottles per station and hour. The number of stations ranges from six to 16, with the total output thus at between 12,000 and 32,000 bottles an hour.

The bottle discharge has also been optimized: here, the PET bottles are transported by their necks by special grippers. Oriented bottle guiding not only prevents the containers from catching but also boosts production efficiency. During planning the KHS experts deliberately omitted to include format parts that have to be changed over according to the container shape.

Finally, those responsible for the project have further improved the energy efficiency of the new system. It now yields similar energy savings to the standard version of the InnoPET Blomax Series V over the predecessor model, with the optimized heating technology causing up to 40% less energy to be consumed. 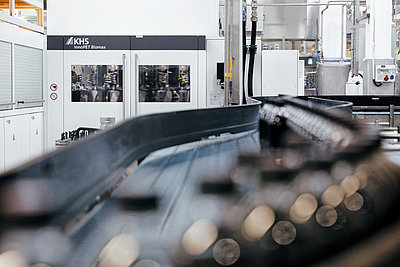 The InnoPET Blomax Series V is the latest generation of stretch blow molders manufactured by KHS. 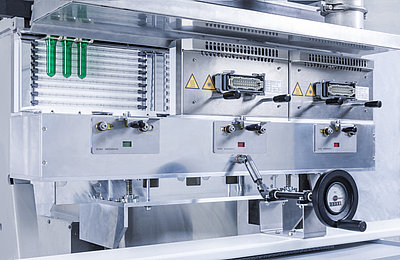 The team of experts at KHS has further developed its preferential heating module so that it is compatible with the InnoPET Blomax Series V. 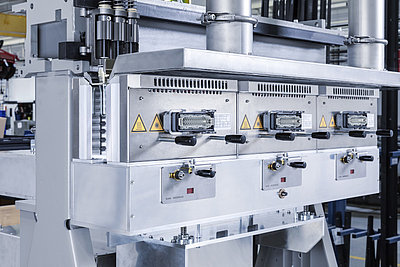 The new preferential heating module is included in the usual heater as standard. The aim is to keep the module the same and that only the length of the full heater changes in relation to capacity. 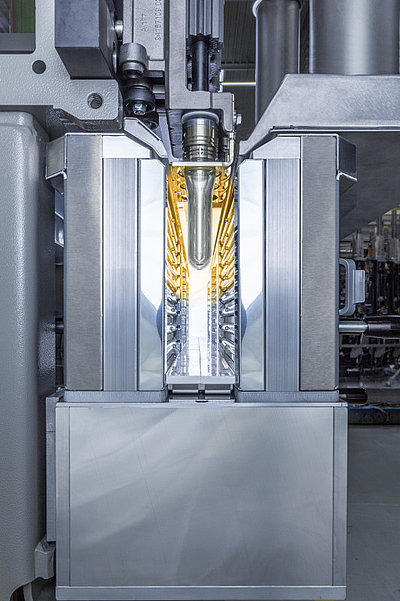 The new KHS system is convincing with its low energy consumption facilitated by the optimized heating technology. 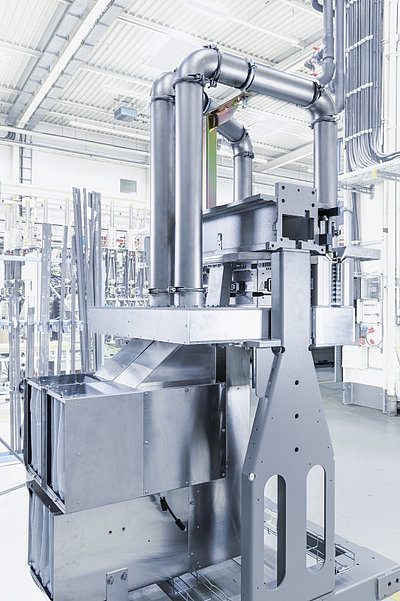 The InnoPET Blomax Series V with preferential heating gives customers a capacity of up to 2,000 bottles per station and hour. The number of stations ranges from six to 16, with the output totaling a maximum 32,000 bottles an hour. 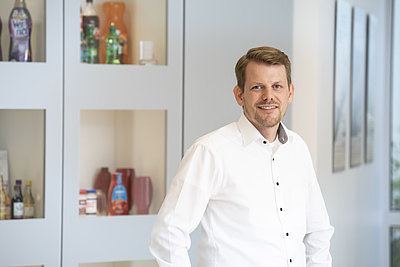