A strong partner for Asahi Soft Drinks.: KHS equips the Japanese bottler with up-to-the-minute technology for its Rokko water brand.

Hamburg/Rokko (Japan), February 10, 2020 – A strong partner for Asahi Soft Drinks.: KHS equips the Japanese bottler with up-to-the-minute technology for its Rokko water brand. The company is particularly convinced by the high quality and sustainability of the InnoPET Blomax Series V stretch blow molder.

Everyone in Japan is familiar with the brands produced by Asahi Soft Drinks, such as ‘Wilkinson’. Outside the country, too, the enterprise is also a known entity as a shareholder in or even owner of famous beer brands such as Tsingtao (China), Pilsner Urquell (Czech Republic) or Grolsch (the Netherlands). Asahi beer is a premium product and now exported worldwide. Not so well known outside Japan – but no less important for the holding – is the local soft drinks and water market. In 2018 Asahi achieved a turnover of over 360 billion yen (around €2.96 billion) in this segment.

With over eight production sites Asahi Soft Drinks Co., Ltd. offers a wide selection of products from ciders and teas through milk beverages to still and carbonated mineral waters. The company bottles its ‘Rokko No Mizu’ water at the location of the same name which is not far from the cities of Kōbe and Osaka. Rokko was one of the very first mineral waters produced by what is now an international concern, always driven by the high requirements made of the quality of the product. Today, it is filled into PET bottles to also meet consumer demand for a simple, safe and sustainable container.

When looking for the best-possible combination of bottles manufactured reliably and to a high quality the choice fell on the KHS InnoPET Blomax Series V stretch blow molder. Asahi Soft Drinks sums up why the company ultimately opted for this particular machine. “We clearly aspire to technological leadership which is why we focus on sustainability, efficiency and state-of-the-art technology.”

The KHS InnoPET Blomax Series V was exhibited at the BrauBeviale trade show in Nuremberg, Germany, in November 2018. Prior to the event Asahi constantly kept up to date with KHS’ new developments and was one of the first customers to decide to commission the new series. This was also the case in 2008 when a prototype of the InnoPET Blomax Series IV found its way to Japan. Twelve years later the new and meanwhile established Series V is now producing 600-milliliter to-go bottles and large two-liter receptacles of still Rokko mineral water. A total of around 200 million containers a year are manufactured on the KHS system.

Blomax Series V cuts energy consumption by up to 40%

“We’ve built up a trusting relationship with KHS over many years,” explains Asahi Soft Drinks. “At no time have we regretted  investing in the new series.” Asahi can attest that its energy consumption has been demonstrably reduced by up to 40%. The systems supplier from Dortmund has made this possible by including a number of further developments in its next generation of Blomaxes.

The InnoPET Blomax stretch blow molder has always been one of the most reliable and efficient machines of its kind. The Series V saves up to 40% in energy compared to its predecessor through the implementation of a completely new heating concept. The near infrared (or NIR) heater centrally installed in the closed reflector tunnel forms the nucleus of this. In the heater the preforms pass the centrally arranged heating units to both the left and right. This means that every single NIR heater is used twice, so to speak.

In the Series V KHS has supplemented its patented AirbackPlus air recycling system for an up to 40% saving in compressed air with its new EcoDry air management system. This uses the residual air from the blowing and recycling process to replace a separate air drier in the base mold area and in the blow wheel, again yielding significant savings in energy.

KHS also affirms that its customer is satisfied with its new machinery. “When a Japanese company like Asahi trusts in us thanks to the notable efficiency and reliability of our machines, then that’s a great honor indeed,” says Matthias Gernhuber, head of Area Sales and Product Management for Asia-Pacific at KHS Corpoplast GmbH. “For saving energy in the interest of the environment and the demand for product quality are of especial importance to the Japanese.”

Convinced by the system performance and in order to meet its own requirements and keep up with its rate of growth, Asahi recently announced that plans for a second stretch blow molder from the new series are already underway.

The KHS Group is one of the leading manufacturers of filling and packaging systems for the beverage and liquid food industries. The KHS Group includes the following companies: KHS GmbH, KHS Corpoplast GmbH and numerous subsidiaries outside Germany, located in Ahmedabad (India), Sarasota and Waukesha (USA), Zinacantepec (Mexico), São Paulo (Brazil) and Kunshan (China). 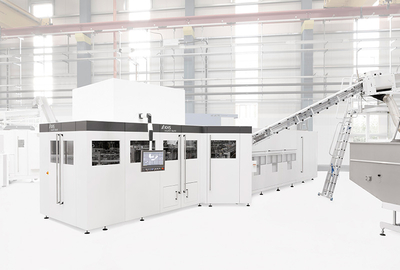 The InnoPET Blomax is one of the most reliable and efficient machines of its kind. Thanks to its optional new heating concept the Series V consumes up to 40% less energy compared to its predecessor. 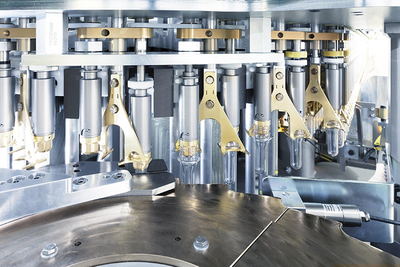 In the heater the preforms pass the centrally arranged heating units to both the left and right in a double gate. KHS has thus been able to almost halve the number of heater boxes needed.