KHS has been using robots successfully for 25 years, especially in the packaging and palletizing sections of its lines.

Dortmund, February 25, 2021 – KHS has been using robots successfully for 25 years, especially in the packaging and palletizing sections of its lines. These high-tech systems master tasks such as sorting, distribution, depalletizing, palletizing and stacking efficiently, flexibly and economically. In the future KHS wishes to make greater use of standardized systems and solutions in order to give its customers even faster lead times. Virtual commissioning also features heavily in the company’s plans for the future.

The use of robots in the packaging and palletizing process steps is on the increase both in KHS’ single machine business and in its line projects. They are considered to be extremely reliable and low maintenance and provide secure production. They often perform several tasks at the same time and are valued as a future-proof investment. All that needs doing when setting up new functions is to replace the specific tool and modify the programming. Moreover, these intelligent machines produce at a low cost and are easy to operate. It is thus no surprise to learn that a growing number of bottlers in the beverage industry wish to make greater use of ‘colleague robot’.

Robotics at KHS: many years of expertise

KHS has been making successful use of robot technology on its production lines for 25 years now. The Dortmund systems supplier thus has a wealth of experience and expertise in this field of application. KHS masterminded its first projects in the palletizing section for customers in Gerolstein and Regensburg back in 1996. As the maximum weight that could be processed by the robots then in use was subject to certain restrictions, to start with they were not used to palletize full layers. Initially, typical applications included palletizing and depalletizing, packing and unpacking of returnable crates and keg palletizing.

Since the beginning of the 2000s KHS has worked with the KUKA company based in Augsburg, Germany. Back then, the systems designed by the international automation specialist were able to manage greater weights and used the same machine control system as that found in KHS equipment at that time. KHS also relies on technology manufactured by Japanese electronics and mechanical engineering company FANUC. “If someone’s already using a certain system, they don’t want to switch to another one. It’s almost a question of religion,” explains Christoph Wiesenack, palletizing product manager in Worms.

As KHS has profound knowledge of both suppliers’ systems, it is secondary which components the expert team works with. “However good the robots are, they’re only brought to life when used properly,” he emphasizes. This is where KHS comes into play. “With our experience we know where and for which functions robots can be constructively used. Our concrete tasks are programming and the manufacture and configuration of tools and peripherals – from pallet conveyors through grouping and unloading tables to centering.”

The Dortmund systems manufacturer has been using robots for grouping since 2004, a process in which packs are formed into layers. “This application is our bread and butter, so to speak,” smiles Wiesenack. Since the beginning the team in Worms has continued to develop its robotics, particularly the robot heads. “These are the tools at the end of the robot arms that come into direct contact with bottles, cans, packs, cartons or crates. Hardly anyone knows better than we do what has to be taken into account for products to be processed flawlessly.” This is why KHS engineers these product-contacting parts itself. Special functions integrated into the heads include crash protection, for instance, that prevents packs and machines from damage. There is also a compensation system that reduces wear and abrasion and an extremely simple clamping jaw changeover: the packs to be grouped are gripped by the servo-motorized jaws and pushed into the required position. “We set the clamping pressure to a defined value with the help of the motor’s power input and can thus grip and process products very gently – even sensitive packs such as our new paper pack,” Wiesenack states.

Robot grouping at KHS is now largely standardized – both with respect to the table, its position and the programming. Variants have one to three robots and are available with one to four infeed lanes. “Our product center is experienced in this without us having to clarify much more here,” says Wiesenack. Accordingly, the number of grouping robots installed to date is high and currently amounts to about 600, with 50 new ones added each year.

Besides grouping, KHS currently also uses robots to palletize non-returnable packs and for other applications such as sorting and distribution. In kegging robots are used to unload and palletize kegs, for instance. Image processing systems enable further functions to be incorporated, such as keg turning on demand, fitting position detection and identification of the layer pattern on the pallet. The systems can also adjust the process steps to suit the current kegging situation. Automatic tool changeovers can be provided as an option for most robot applications and also retrofitted on demand.

KHS’ expertise is particularly important when special functions are required that standard machines cannot perform, for example during loading or sorting. One example of this is in operation at RHODIUS Mineralquellen in Burgbrohl, where segregated bottles and crates are packed and palletized according to type on one machine. Here, the robot picks segregated crates of returnables comprising mainly foreign bottles from the line and places them on pallets for removal from the line. It also packs segregated empty bottles into empty crates and places these by type according to a set pattern back onto pallets that are then ready for discharge. With this, during production the system generates sorted empties for later processing more or less as a by-product. Flexible adaptation to the sorting rate means that functions can be assigned as required during the shift.

One very different special application has been developed in the course of KHS’ cooperation with one of the world’s leading soft drinks producers. Over the past five years KHS installed several robot applications here for the preparation of basic soft drinks components required at the company’s various production sites to mix its finished beverages. In this example, too, the team of experts from KHS developed a number of line-specific palletizing systems. The future viability of the systems has also proved itself here; following the move to a new facility, by decoupling certain functions and through rearrangement of the palletizing section a palletizing robot already supplied was assigned two more lines for palletizing, increasing the palletizing capacity in the process. The customer was extremely satisfied with the results.

It goes without saying that even robots have their limits. “It’s like with people; they too can only perform a certain number of tasks within a given time,” Wiesenack comments. “The more functions we include on a machine, the lower the output in containers per hour.” If groupings process up to 144,000 cans per hour, for example, combined palletizing cells in the lower or medium capacity range are used. The output here depends on the number of functions to be carried out, such as picking and placing packs onto pallets, layer formation and processing pallet liners and empty pallets. The palletizing cell permits complete, fully automatic palletizing, including pallet and pallet liner handling, in a relatively small space of just 35 square meters.

In the future Wiesenack also wants to make loading stations as uniform as possible so as to offer standardized systems as for grouping that enable faster lead times and incur less cost. “Our palletizing cell for the low capacity range is a first step in this direction,” he tells us. “We can imagine that we’ll achieve higher outputs on standardized systems in the future because the focus is solely on palletizing; we can then get the most out of the robot here. On customized systems, where the accent is on flexibility rather than just palletizing, we’re bound by the setup and specified tasks.”

The specialists in Worms are also planning to extend virtual commissioning and rely more heavily on the digital twin in order to exploit further potential for increasing efficiency. Synergies are to be used for this purpose: robots are usually equipped with a digital environment by their manufacturers, meaning that KHS can also commission these virtually. All it then has to do is integrate its tools into the existing environment.

The KHS Group is one of the leading manufacturers of filling and packaging systems for the beverage and liquid food industries. Besides the parent company the KHS Group also includes KHS Corpoplast GmbH and numerous subsidiaries outside Germany, located in Ahmedabad (India), Waukesha (USA), Zinacantepec (Mexico), São Paulo (Brazil) and Suzhou (China).

KHS manufactures modern filling and packaging systems for the high-capacity range at its headquarters in Dortmund, Germany, and at its factories in Bad Kreuznach, Kleve, Worms and Hamburg, where the group’s PET expertise is pooled. The KHS Group is a wholly owned subsidiary of the SDAX-listed Salzgitter AG corporation. 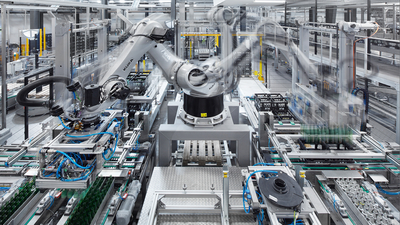 Stays cool even when working at full capacity: the KHS Innopal RK repacks segregated bottles into crates and places these onto pallets by type. 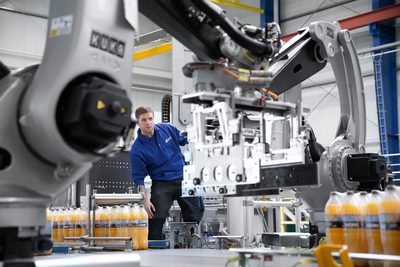 Packs of six non-returnable PET bottles prior to gentle but precise pickup by the clamping jaws: two grouping robots wait for the KHS commissioning engineer to give them the go-ahead. 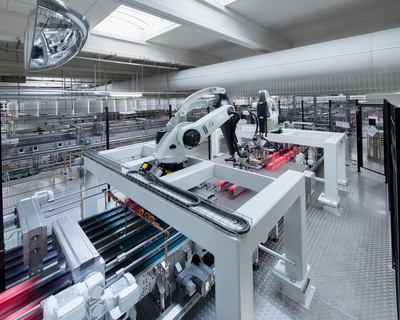 At KHS robots are used for manipulation during pack conveying, among other things, such as here in the distribution of wrap-around cartons. 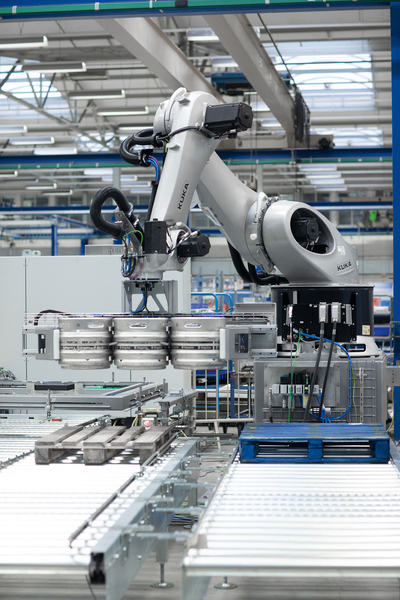 At the KHS assembly shop in Worms a robot destined for keg processing is tested in operation before being shipped to the customer. 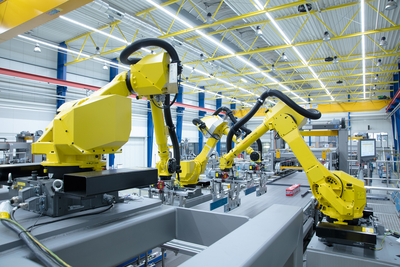 Some customers prefer KUKA robots, others those made by FANUC – KHS has profound knowledge of the systems manufactured by both suppliers. 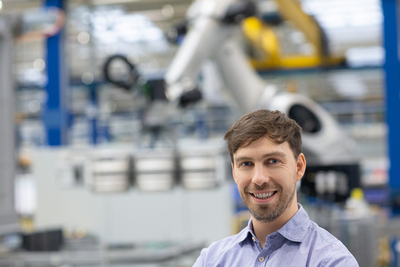 Christoph Wiesenack has worked with robot applications for the beverage industry at KHS for seven years now. 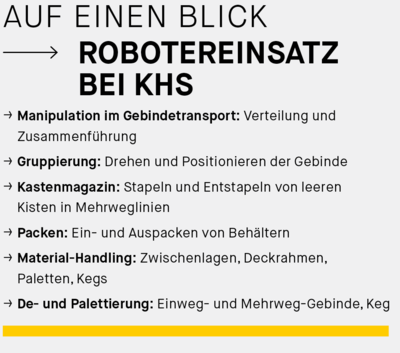 The many tasks mastered by KHS robots during palletizing.