Strong partners: RHODIUS Mineralquellen has trusted in KHS technology since 1970

The partnership between RHODIUS Mineralquellen and KHS is just one of many examples of the excellent relations KHS enjoys with its customers. The mineral water bottling plant recently invested in a returnable glass line from the Dortmund systems supplier that posed a number of specific challenges.

The special bond between RHODIUS Mineralquellen and KHS is expressed in the positioning of the two companies: both pledge to be a 'reliable partner'. Mineral water bottling plant RHODIUS meets this claim as Germany’s leading contract filler of cans, among other things, and KHS as a systems supplier to the beverage industry with over 150 years of experience. You could almost say – modifying a remark once made by former German chancellor Willy Brandt – that here “what belongs together, works together”.

Both parties are indeed proud of their close partnership. This is evident the minute they strike up a conversation. “Our bond has ultimately grown over the years,” says Hannes Tack, the member of the executive management board at RHODIUS Mineralquellen responsible for production and technology. “It all started in 1970 with our first canning line from KHS. We now operate two of these, plus a PET, a keg and a brand-new returnable glass line.” For Tack, the decision to increasingly focus on lines and machines engineered by the people in Dortmund is a strategic one. “KHS has us equally convinced regarding project planning, installation and commissioning. The company makes sure that we have the greatest possible line availability during ongoing operation. And we’ve known our contacts for years; this greatly simplifies day-to-day arrangements. “In return, KHS knows exactly what RHODIUS’ needs and requirements are. “In view of our great flexibility and the diversity of our product range, which we serve very different markets with, this is a great advantage,” Tack adds.

KHS also benefits from its closeness to RHODIUS, as Gerd Bodenheimer, senior sales manager at KHS, explains. “With a customer as innovative as RHODIUS we can explore new avenues together. For us as engineers this is like having a playground for experimenting – which you don’t often find.” The KHS prototypes currently being tested at RHODIUS include a new sensor system for measuring flow and quality. New advances are also being jointly made in the field of packaging. “We produce for the entire world here. Time and again we’re thus confronted with new formats the German market isn’t as yet familiar with in this guise,” Bodenheimer emphasizes. At the moment, to name but one example, a Topclip system made of cardboard to form packs of six cans is under discussion.

The two companies also see their physical proximity as an asset. RHODIUS’ headquarters are in Burgbrohl on the northwest edge of the Eifel Hills and thus pretty much equidistant from four of KHS’ five German plants in Dortmund, Bad Kreuznach, Kleve and Worms. “As the distance between us is relatively small, in most cases KHS can meet our high service standards by reacting very quickly – also when it comes to procuring spare parts,” Tack determines. Bodenheimer adds, “When we want to show other beverage producers one of our reference projects in action, then it’s never far to the RHODIUS site.” Tack agrees and says, “We profit in many ways from being something of a model customer for KHS.”

Concentrating more or less entirely on just one technological partner also has practical benefits for the beverage filler. “This strategy makes day-to-day work much easier for our technical personnel in many respects,” Tack smiles. “This ranges from the extremely uniform graphic user interfaces through the similar way the machines function to the stock of spare parts.”

Lots of technology in a small space

It’s also helpful that KHS is very familiar with the space restrictions and limited possibilities for expansion prevalent at RHODIUS and accordingly can provide systems and solutions that are compact in size. This was last of benefit when the planning of a new returnable glass line began at the end of 2017. At RHODIUS glass containers for its own and licensed brands already have a share of over 50%, with an upward trend noticeable here.

The biggest challenge was to find enough space for the extensive technology needed to process the vast range of products and containers. With a spectrum of eleven different bottles and seven types of crate, the high number of sorting functions – among other concerns – initially caused a few headaches. The existing production shop was expanded in as far as this was possible. A lot of energy and creativity went into precisely coordinating the line layout to fit into its limited surroundings. In doing so, some units were planned as joint machines that can perform two functions.

One example of the above is the combined, fully automatic palletizing and depalletizing of full and empty containers. In a first function a robot picks up crates of returnables from the pallet and feeds them into the process. In a second it places the full crates back onto pallets according to a set pattern that are then ready for discharge. During the shift the functions can be flexibly assigned as required depending on the workload, thus ensuring a high degree of efficiency.

The various 200- and 330-milliliter glass bottles in particular – also from third-party brands – are separated by a camera system and directed towards their own dedicated conveyor belts. Processing and enhancing the diverse assortment of empties is a space-consuming activity. In total, these process steps require more than half of the 800 m2 taken up by the bottle shop.

Saving space is also an important issue in the packaging area. As there isn’t enough room on the horizontal, the various format head parts are vertically stacked in changing magazines and selected and replaced as required in a fully automatic procedure. “As a result of our large portfolio of products, the changeover times had to be cut down to the absolute minimum,” explains Hannes Tack. “All units are automated for conversion as far as possible and where prudent to considerably reduce the amount of manual work performed by our operators.”

Alongside these extensive automation measures, creativity was also called for. For the bottle washer, for instance, an alternative had to be found to the usual steam heating method. RHODIUS’ old boiler room was showing its age and had reached the limits of its capacity. In its place KHS developed a special direct heating system that doesn’t need any long pipes and largely prevents heat loss through the piping. At the same time the bottle washer can also be converted to direct hot water operation when a combined heat and power plant becomes available as a source of energy in the future. KHS has designed the blender so that the single ingredients can be dosed as needed to cater for the product variety – from one-to-one mixtures for spritzers to the minimal flavoring of near-water beverages. Moreover, the design of the filling section on the glass filler was based on a hygiene concept, enabling sensitive products to be filled. This includes an exchange of air that takes place 30 to 40 times an hour in the filling machine’s hygiene area.

“As the demands made of the system were extremely complex, we consciously allowed ourselves plenty of time when planning it,” Hannes Tack tells us. “The design phase of twelve months was marked by frequent mutual visits and trips out to see reference systems. We were able to find all the answers together – some of which demanded great effort. Each of us always did their homework and thought about where further fine tuning could be made and how.”

Once construction in Burgbrohl and manufacture and assembly at the various KHS factories were finished in the spring of 2019, delivery and installation started. Sixty-two truckloads containing 265 metric tons of material were put together in the space of two months. Installation and commissioning took just ten months, enabling the new glass line to be ceremoniously opened in January 2020.

Commissioning was slightly more complicated than expected – and not just because of the 14 formats to be implemented. During the process various options were selected that were originally planned for a later date. This included, for instance, filling beer from the Vulkan Brauerei, an Eifel craft brewery run by Hannes Tack’s brother Malte. “He’s our first contract filling customer on the new line, if you like,” laughs the RHODIUS boss. And certainly not the last, for with the capacity successfully expanded by around 50% products are not only to be contract filled into cans in the future but also into returnable glass bottles – at a rate of up to 20,000 bottles per hour.

All requirements have been met in full – and not just as far as capacity is concerned. Compared to the old line the new plant engineering saves about 40% in energy. When selecting the machines and planning the line RHODIUS didn’t just take ecological sustainability and energy efficiency into consideration, however. “It was important for us to use a technology that’s durable and future-proof so that it can also meet future demand,” Tack stresses.

RHODIUS has invested about €15 million in its new equipment. The returnable glass line is thus the biggest single investment in the history of the company from Burgbrohl. Implementing a project like this requires unconditional trust. RHODIUS and KHS are two partners who respect one another and work on an equal footing. Hannes Tack also judges this in the way the two do business together financially. “Being almost entirely fixated on a single systems supplier perhaps risks building up a certain dependency when it comes to purchasing. This hasn’t had any disadvantages for us to date, however, as KHS has never abused this situation.” RHODIUS can rely on this being the case in the future, too – and also continue on its course of growth, established over the past ten years, together with KHS.

At a glance: the new returnable glass line from KHS 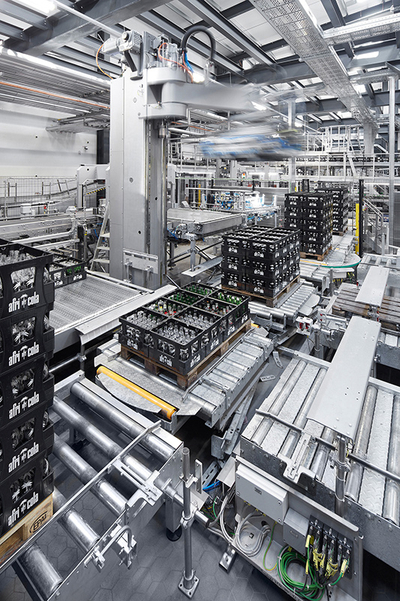 Saves space: combined, fully automatic palletizing and depalletizing of full (back right) and empty containers (front left) on one machine. 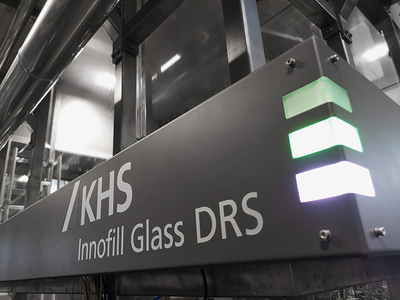 The filling section on the glass filler is based on a hygiene concept that also enables sensitive products to be safely filled. 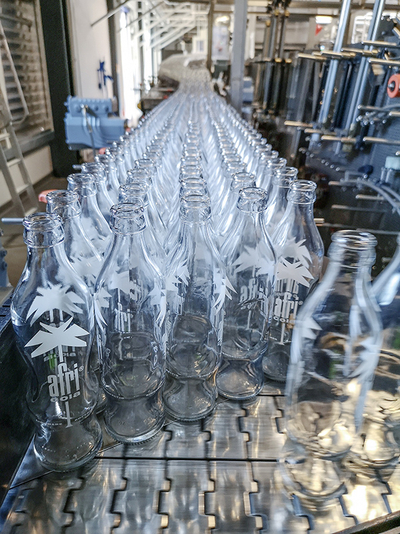 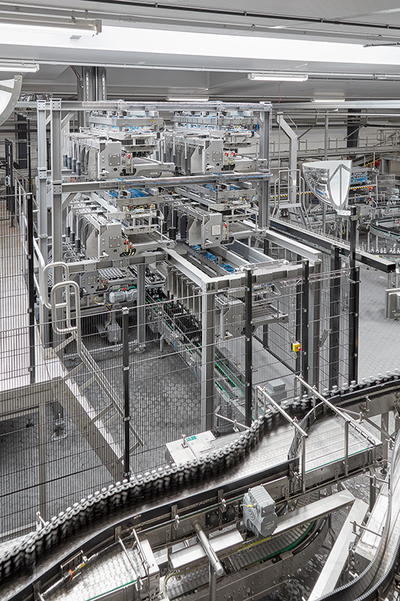 Stacked vertically to save space: the format head parts are removed from the changing magazines and replaced fully automatically. 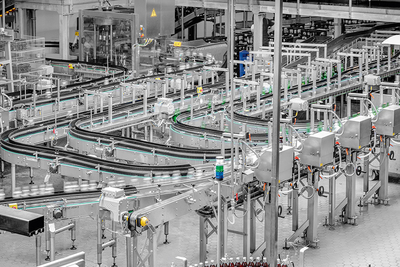 Huge range of mixed empties: the various glass bottle types are guided by a camera system to dedicated conveyor belts. 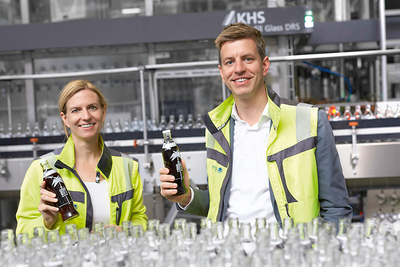