Customization in the can: Coca-Cola procures an individual setup for its canning line in Karlsruhe

Thanks to the experience gleaned through various past projects Coca-Cola European Partners is convinced of the quality of KHS system technology. The company thus recently made the conscious decision to again ask KHS to engineer a fully customized canning line for its production site in Karlsruhe, Germany. While carrying out the extensive order KHS scored points for its precise coordination of the individual machines and lines, enabling the customer to make considerable savings in cost, energy and resources.

Pull the can tab, wait for the fizz and then drink it ice cold: for many, this is quintessential Coca-Cola enjoyment. The general demand for liquid refreshment in cans is on the rise once again, for which there are a number of reasons. Besides the much-loved fizz they make when opened cans are extremely light, easy to hold and offer all-round protection from light and oxygen, thus keeping their contents fresh for an exceptionally long time. The can of today also demonstrates environmental properties which are greatly improved compared to its predecessors; so much material is now saved in its manufacture that the can wall is thinner than a hair. It also has a very high recycling rate of almost 100%.

The renewed surge in demand recently prompted Coca-Cola European Partners or CCEP to commission a new canning line from KHS for its facilities in Karlsruhe, Germany, with a capacity of up to 120,000 cans per hour. This allows the company to be even more flexible in its operations here; after all, for Coca-Cola Germany is one of the most important markets in Europe.

CCEP wanted a turnkey canning line tailored to the specific requirements of the biggest beverage producer in the world. It markets over 80 products in all of the non-alcoholic beverage segments: besides Coca-Cola and soda pop these also include spritzers, juice, water, sports and energy drinks and various tea and coffee beverages. Depending on the product the beverages are sold in carbonated and non-carbonated form, calorie reduced or sugar free. The spectrum is large – as are the demands made of the quality of the filling and packaging systems.

The entire KHS order aspired to coordinate and interlink the individual machines and systems on the canning line with one another to the best possible extent. The starting point for the undertaking was a convincing reference setup already up and running at Coca-Cola in Marseille, France. The line in Karlsruhe is more complex, however, especially in the packing and palletizing section with its three packaging machines, two palletizers and additional quarter pallet processing unit.

In addition, CCEP required a pasteurizer to ensure the microbiological safety of its beverages. This is not necessary for classic Coca-Cola beverages but essential when it comes to energy drinks. As the company also fills energy drinks in Karlsruhe in the form of the Monster brand, the pasteurizer was to be added as a retrofit should the product be filled on the same line in the future. This challenge was successfully met by KHS, with its specialists readily applying their expertise to include an Innopas PIISC tunnel pasteurizer in the new plant engineering. Furthermore, if required the thermal container treatment unit can be accessed not only by the canning line but also by a glass line which can master up to 60,000 bottles per hour.

„This was a big project for both sides. The cooperative partnership on both sides has helped make this project a success.“ 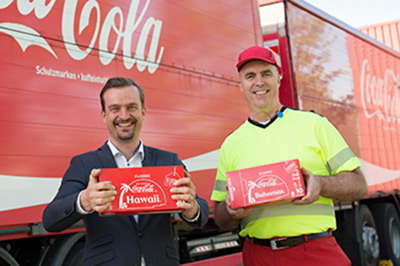 One positive side effect of the new technical setup is that it includes an energy-saving concept, with the water from the empty can rinser collected and reused for the pasteurizer. This helps Coca-Cola to cut costs, save resources and be gentler on the environment. Another plus point of the pasteurizer is that it needs fewer chemicals than in the standard procedure. These are saved by the use of ionized air in the process water.

Further highlights of the specially designed line CCEP is now profiting from include the parallel processing of two different stock-keeping units which can produce six-packs and ten-packs at the same time, for instance, and the gas heater in the shrink tunnel which can cut energy costs by up to 75%.