Berlin startup share is the first beverage producer in Germany to sell its water in PET bottles made of 100% recyclate.

Download Article (23 MB)
Berlin/Dortmund, October 30, 2018 – Berlin startup share is the first beverage producer in Germany to sell its water in PET bottles made of 100% recyclate. With its expertise from the Bottles & Shapes™ consultancy program the KHS group supported the company by helping to design and develop the bottle in a very short time indeed. The plans are ambitious: in 2019 share wants to fill water into about a million bottles a month made entirely of recycled PET and thus save over 200 metric tons of plastic waste a year, according to the company. For several weeks now the product has been on sale at Germany’s supermarket chain REWE and drug store dm and has caused quite a stir in the media. “It took a long time for the original idea to be implemented,” says Iris Braun, head of Product and Social Projects at share. “Finalizing the technology and obtaining certification are both lengthy processes. Your partners are thus crucial.” Besides the two aforementioned retailers share’s other partners are bottler Mineralbrunnen Allgäuer Alpenwasser and preform manufacturer Plastipak, which is also the world’s biggest converter. KHS Corpoplast was also largely instrumental in the implementation of the project.

Experience from over 4,000 realized bottle designs

The German engineering company supported the startup in several ways, including in the development of the recyclate bottle design, states Marc Eysel, who is responsible for sales in Northern Europe at KHS Corpoplast. “We implemented the development very quickly and worked on a suitable design together,” he says. Thanks to its holistic Bottles & Shapes™ consultancy program the systems supplier was able to contribute to the share project experience drawn from over 4,000 designed bottles. “KHS developed the bottle very quickly for us which was enormously helpful,” says Braun. Eysel states that there were no unusual hurdles or challenges to be overcome through the use of 100% recyclate. “Manufacture is actually simpler as the material’s darker color makes the preforms easier to heat than PET bottles made of virgin material.” Besides providing advice on the bottle design KHS also helps with production. share’s still and carbonated water is bottled at the Allgäuer Alpenwasser bottling plant in Oberstaufen using KHS technology. The bottles are blown on an InnoPET Blomax stretch blow molder, with no special adaptations to the system necessary, according to Eysel. Following the market launch of the recyclate bottle, interest is now also growing among other beverage producers, emphasize Braun and Eysel. “A number of bottlers wishing to increase the amount of recycled PET they use have now contacted us,” claims Eysel. “The protection of the environment also plays an important role at KHS. We support this by providing resource-saving plant engineering and also by developing sustainable PET bottles.” share hopes that it has provided the right incentives for more sustainability, states Braun. “In the end it’s the consumer who decides.”

share from Berlin is what is known as a social startup. At the beginning of 2018 the company launched its “share” social food brand in Germany. The idea is that for each purchased product – mineral water, hand soap or organic nut bar – the company provides people in need with a similar product on the basis of the 1+1 principle. According to the company, one bottle of water provides enough drinking water for a day through the construction or repair of wells in crisis regions such as Senegal, for example. Buying an organic nut bar gives needy people in African countries a portion of food. The food banks in Germany also support share. The price of a share product is no different to that for similar products. According to share, since the market launch three million bottles of water have been sold and 30 wells in Liberia, Cambodia and Ethiopia funded.

KHS is one of the leading manufacturers of filling and packaging systems for the beverage, food and non-food industries. The KHS Group includes the following companies: KHS GmbH, KHS Corpoplast GmbH, NMP Systems GmbH and numerous subsidiaries outside Germany. KHS GmbH manufactures modern filling and packaging systems for the high-capacity range at its headquarters in Dortmund, Germany, and at its factories in Bad Kreuznach, Kleve and Worms. The KHS Group's PET expertise is pooled at KHS Corpoplast GmbH in Hamburg, Germany, where innovative PET packaging and coating systems are developed and produced. NMP Systems GmbH, a wholly-owned subsidiary of KHS GmbH based in Kleve in Germany, designs and markets new, resource-saving packaging systems. In 2017 KHS and its 5,070 employees achieved a turnover of around €1.137 billion. The companies in the KHS Group are 100% subsidiaries of the MDAX-listed Salzgitter AG corporation. 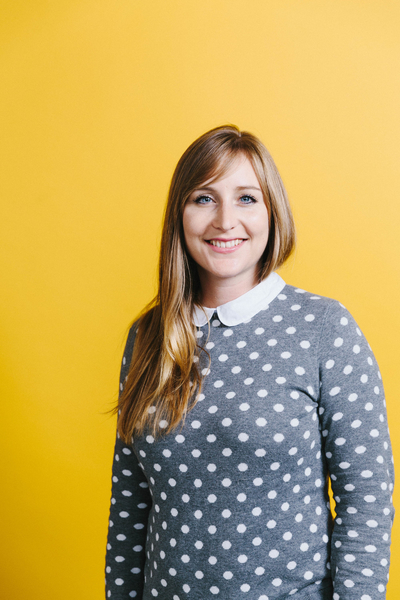 share hopes that it has provided the right incentives for more sustainability, states Iris Braun, head of Product and Social Projects at the startup. “In the end it’s the consumer who decides.” (Picture source: share / Gene Glover) 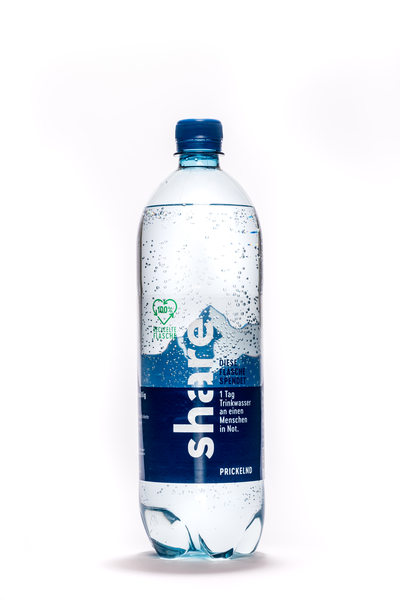 Berlin startup share is the first beverage producer in Germany to sell its water in PET bottles made of 100% recyclate. (Picture source: share / Victor Strasse) 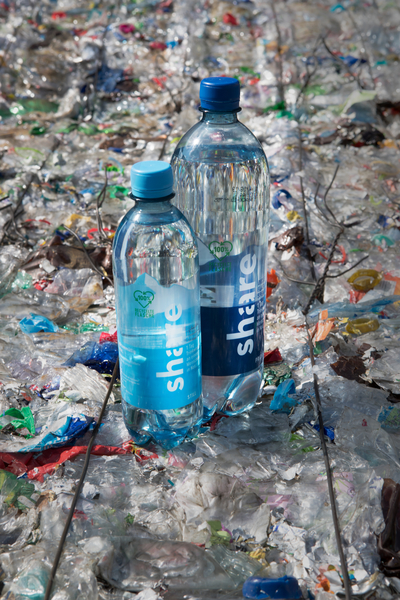 With its expertise from the Bottles & Shapes™ consultancy program the KHS group supported share in the design and development of the bottle. (Picture source: share / Victor Strasse)