For years KHS has been a reliable partner for can filling and packaging to the biggest beverage factory in Europe, situated in Wakefield in Great Britain. At the start of the corona crisis the Coca-Cola bottler again benefitted from the quality of the companies’ cooperation and KHS technology.

For years KHS has been a reliable partner for can filling and packaging to the biggest beverage factory in Europe, situated in Wakefield in Great Britain. At the start of the corona crisis the Coca-Cola bottler again benefitted from the quality of the companies’ cooperation and KHS technology.

At the end of the 19th century the city of Wakefield in the north of England developed into a hub of the British industrial revolution. Once one of the country’s major suppliers of barley and malt, wool spinning mills, brickyards and engineering works with strong links to the rapidly growing mining industry now became established. Among the local businesses were several breweries, meaning that the city today can look back on a certain tradition in the production of beverages.

This has now been revived: since 1989 Wakefield, that together with Leeds, Bradford and Huddersfield constitutes one of the most densely populated areas in the United Kingdom, has been home to the largest soft drinks factory in Europe. Here, at one of five production sites in Great Britain, Coca-Cola European Partners (CCEP) fills up to 10,000 cans and 1,800 PET bottles of soft drinks per minute – 24 hours a day, seven days a week. This amounts to 45% of the total volume CCEP produces in the UK: expressed in absolute figures, that’s 176 million sales units1 or a billion liters of finished product a year.

The factory has a total of eight filling lines; five of these process cans with volumes of 330 and 500 milliliters, the remaining three PET bottles holding 500 milliliters and 1.0 to 2.25 liters, producing around 300 stock keeping units or SKUs. The world’s largest independent Coca-Cola bottler cooperates with KHS as its technological partner: the Dortmund machine and systems manufacturer is responsible for four of the five can fillers and two turnkey canning lines. The latter two lines 4 and 5 were installed and commissioned within one year. After Line 4 had proved a total success from the first day forth regarding availability and efficiency, the bottler then commissioned KHS to supply a second canning line. The heart of each line is the Innofill Can DVD can filler – here with a capacity of up to 120,000 cans per hour.

“The aim of our investment was of course to boost capacity,” says Michail Skarpathiotakis, senior project manager at CCEP’s headquarters in Uxbridge outside London. “Each can counts!” The prime focus was therefore on cardboard multipacks that are produced in a wide variety holding between four and 30 containers. During the corona crisis, where people are spending more time at home, this type of pack is currently experiencing a growth in sales that runs into two figures. The Innopack Kisters wrap-around shrink packers integrated on these two lines are thus extremely powerful and reliable.

As a bottler that aims to keep its stock down to the minimum owing to its vast product portfolio, CCEP sets great store by maximum flexibility in production. This calls for fast format changeovers above all else. The fact that about 40% of the available time on the new Line 5 is taken up with format changeovers and cleaning says less about the time needed for product switches but rather indicates that there are a great number of these. When asked how many there actually are, Wakefield’s operations manager Kerry Morgan-Smith replies: “Too many.” However, in view of the increasingly individual demands of consumers, this is the only right way to go about things, she continues.

Sustainable in every respect

Besides CCEP’s output and efficiency levels, the bottler is also making a record attempt to be more sustainable, setting standards in recycling, the prevention of waste and the consumption of energy and other resources. Like all of the manufacturing sites in Britain, Wakefield also goes by the motto of “zero waste”, with no refuse being sent to waste disposal sites. All packaging is 100% recyclable. “I think that nowhere else in Europe is the debate on plastics as heated as it is in England,” suspects Andy Carter, KHS’ head of sales for Great Britain and Ireland. “The pollution of the environment and especially our seas with plastic waste is omnipresent in our media. This means that consumers find this topic extremely important.”

The beverage can enjoys an above-average popularity in the UK. While in Germany PET bottles have an 81% share of the CCEP packaging mix and cans a mere 5%, the ratio amongst the British is 46% to 35%. This makes them Europe’s top can users. Nevertheless, the bottler is reacting to consumers’ growing awareness of the plastic problem. “Since October we’ve been using 50% recyclate in our PET bottles,” Morgan-Smith emphasizes. “This is the equivalent of 21,000 metric tons a year. And we’re working on further increasing this amount.” Buying habits have also changed as regards secondary packaging. “We’re noticing that the share of FullyEnclosed carton packs is on the rise – at the expense of shrink packs wrapped in film.”

Saving on resources in focus

As far as its supply of energy is concerned, Wakefield is well on the way to becoming self-sufficient. “We’ve invested a million pounds in the construction of a combined heat and power plant,” reports Morgan-Smith. “This means we can generate renewable energy on site and help save 1,500 tons of CO2 a year. Not very far away we also operate a photovoltaic park the size of twelve soccer fields that supplies the factory with solar power. This covers about 15% of our total electricity consumption, enabling us to considerably reduce our carbon footprint.” The bottling plant now meets 100% of its energy requirement using renewable sources. CCEP is also a top player when it comes to gradually reducing the amount of water consumed during production. Approximately 1.3 liters of water are used for each liter of finished product – a figure that has halved over the course of the past 15 years.

The British soft drinks bottler also attaches great value to sustainability with respect to the use of materials. “In the past we’ve implemented a number of successful programs to reduce the weight of both our cans and our bottles,” Morgan-Smith explains. “In 1994 our 500-milliliter PET bottle weighed 36 grams, for instance; it now weighs just 19.9.”

As with each project in the Coca-Cola system, KHS had to take part in the usual bidding procedure. The group has an extremely sophisticated bidding platform that includes a detailed scorecard of commercial, quantitative and qualitative technical parameters. KHS achieved the best result on this scorecard, thus proving that its machines also reach the set productivity targets under the given technical and financial prerequisites for Line 5.

Once the contract had been awarded, the companies hit an obstacle no-one could possibly have predicted, as Skarpathiotakis remembers. “We were still at the preparation stage when we were suddenly confronted with Covid-19. This was naturally an extremely challenging time for us all.” Andy Carter tells us, “The food and beverage sector was classed as being a key industry. We still had to overcome a lot of bureaucratic hurdles, however, in order to prove the necessity of the project and enable our colleagues to cross borders throughout Europe that had suddenly closed. In these difficult times we had to create a protected environment, implement social distancing and organize accommodations and meals for our employees. We thus all pulled together and very quickly found a pragmatic solution.” This also involved getting up in the middle of the night. “The British border officials in Calais in France once rang me at two in the morning to check whether the people they had waiting there really were authorized to enter the country.”

Before the project could get underway, however, a compromise had to be reached between the plant in Wakefield and CCEP’s headquarters. Some local colleagues were initially skeptical about engineers from outside the UK spending time at the factory during the pandemic. Headquarters, on the other hand, wanted the installation to go ahead as planned. “As one of the very few contractual partners to be granted access to the plant premises at all during lockdown, KHS had to act as a kind of role model,” Skarpathiotakis explains. “This really worked very well.”

Installation started a week after England had gone into total lockdown. In these difficult circumstances the project also proved a huge technical challenge. “Together with KHS we managed to install two lines within the space of just twelve months,” smiles Morgan-Smith. “We’d never done this before – at least three to four years usually elapse between projects like these. We went from naught to sixty – and in the middle of the pandemic, too! It was a real stroke of luck to work with such a committed and outstanding team where every single member focused on our requirements as a customer.” During her career she has worked with various other project teams and is well aware of the difficulties different mentalities and language barriers can cause. The cooperation with KHS, however – and here she even reels off a whole list of names of people in the team – was exceptionally harmonious, very pleasant and went totally smoothly.

At the end of the day, the management’s decision proved correct: there were no infections because all of those involved exercised enormous discipline in keeping to the extremely strict hygiene and social distancing rules. The line was installed and commissioned without any problems or delay. From day one the new line proved supremely efficient and surpassed even the highest expectations. Everyone is very satisfied with the happy outcome of the project. “We can all be really proud of what we’ve achieved here together,” believes Skarpathiotakis and Morgan-Smith adds, slightly incredulously, “I still don’t quite know how we did it!”

1 In the Coca-Cola system a sales unit consists of twenty-four 8-fl.oz. bottles, the equivalent of 5.678 liters.

The KHS Group is one of the leading manufacturers of filling and packaging systems for the beverage and liquid food industries. Besides the parent company (KHS GmbH) the group also includes numerous subsidiaries outside Germany, located in Ahmedabad (India), Waukesha (USA), Zinacantepec (Mexico), São Paulo (Brazil) and Suzhou (China). 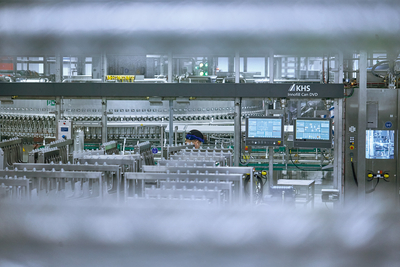 Extremely powerful and efficient: not one but two KHS Innofill Can DVD can fillers have been installed at Coca-Cola European Partners in Wakefield within a single year. 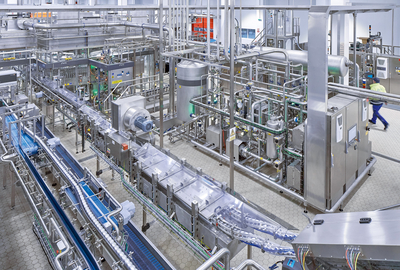 On the right is the KHS Innopro Paramix C blending system, in the foreground the empty can feed to the filler and to the left the conveyor that transports filled and seamed cans to the packer. 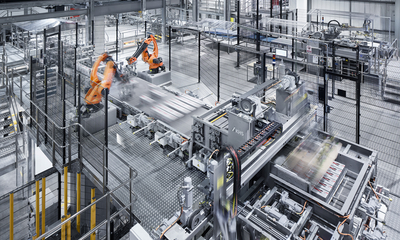 The KHS palletizer processes FullyEnclosed cartons that are gradually taking over from the film-wrapped shrink pack at CCEP in the UK. 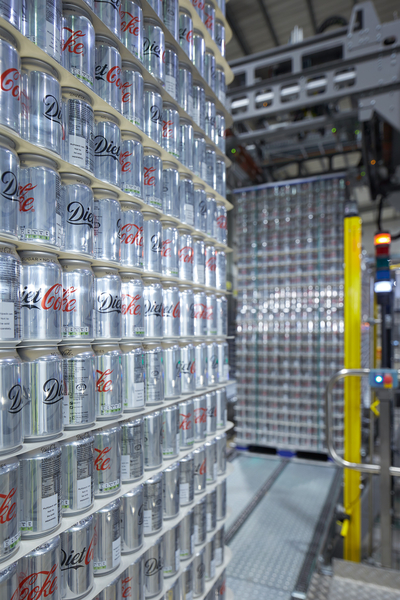 Two thirds of the beverages sold by CCEP in Great Britain are low- or zero-calorie – more than in the rest of Europe. 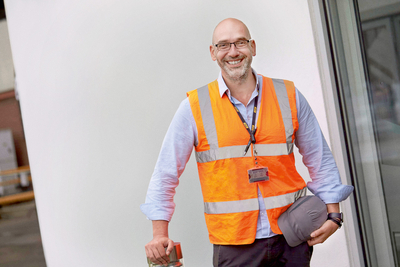 Michail Skarpathiotakis, senior project manager at CCEP in Great Britain, on working with KHS: “We can all be really proud of what we’ve achieved here together.” 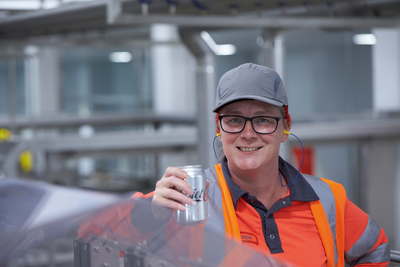 With the huge variety of products and packs to process, operations manager Kerry Morgan-Smith sometimes needs a little refreshment between the countless format changeovers.