On the spot: Big Bottling Company invests in a powerful PET line from KHS

A young company in Nigeria with plans for growth has opted for KHS for its new PET line. The Dortmund systems supplier has proved especially convincing with its local team that installed the system with practically no outside help.

With over 200 million inhabitants Nigeria is already by far the most heavily populated country in Africa. In the next 30 years the United Nations reckon on this number doubling, meaning that by 2050 around 410 million people will live here. After India and China, the country of Nigeria will then have the world’s third-largest population. The supply of drinking water is inadequate: until a few years ago only one in two people had access to clean water. The country’s infrastructure is also still in its infancy, so that Nigerians are continuing to have to resort to buying water in bottles – about 45 billion liters of it in 2019.

In contrast, with a volume of approximately two billion liters the carbonated soft drinks segment is modest compared to the rest of the world. Accordingly, there’s huge potential for growth on a hotly contested market that primarily targets the as yet small but rapidly increasing middle class. This market is dominated by multinational companies. Alongside a number of medium-sized providers with three or four filling lines there are a vast number of small companies that are growing fast.

To date Big Bottling Company (BBC) Nigeria Limited, that started up in 2015 as a Nigerian subsidiary of the AJE Group from Peru, has been a fairly minor player. The AJE family business, founded over 28 years ago, is today one of the biggest international beverage groups worldwide with production sites in more than 28 countries. In terms of sales volume, internationally AJE is the fourth-largest producer of non-alcoholic beverages. BBC’s bottling plant is in Agbara on the edge of Lagos, the most densely populated city in both Nigeria and the whole of Africa. The products made by BBC include the extremely popular BIG Cola, BIG Orange, BIG Lemon & Lime and BIG Water.

Thanks to a clever strategy the company’s market entry a few years back proved a great success: instead of in the standard 500-milliliter bottle common to its competitors BBC launched its products in a 650-milliliter receptacle – for the same price. With this smart move the startup was able to score with its decidedly cost-conscious consumers and secure itself a respectable share of the market from day one. This element of surprise was also to BBC’s advantage, for it took a while for its competitors to follow suit.

Investment in a PET line from KHS

Since British private equity company Duet Group joined BBC in 2018, there’s been a lot of investment in order to ready the company for the expected exponential growth in demand and expansion to the neighboring countries. One of the more notable new acquisitions is a PET line with a capacity of up to 48,000 bottles per hour engineered by Dortmund systems supplier KHS. The InnoPET BloFill stretch blow molder/filler block forms the heart of the line. In order to meet BBC’s sustainability targets, the stretch blow molder has been equipped with the AirBackPlus air recovery system. It recycles the compressed air used in the stretch blow molding process, reuses some of it and in doing so reduces the amount of compressed air needed. This cuts the amount of energy consumed during compressed air generation by up to 36%.

The volumetric Innofill PET DRV filler is a winner on product and bottle changeovers thanks to its very short setup times. As BBC handles many different SKUs, this gives the company the flexibility it needs and at the same time ensures extremely high line availability. The line is supplemented by various packaging and palletizing equipment that includes a labeler, packer and palletizer, among other machinery.

The advance of PET

For KHS the Big Bottling line is the first PET reference in this capacity range in Nigeria. Until now, here as in many parts of Africa beverages were chiefly filled into glass bottles. PET containers have become more popular in the last few years, however. “The plastics debate hasn’t yet gripped Nigeria as hard as other countries in Africa,” explains Alexander Fuchs, managing director of KHS Machines Nigeria. The issue still takes little political priority; there are no laws governing waste and owing to the low price of oil the climate for investment in waste management infrastructure is poor. “Despite all this, a cross-company initiative has been formed by several major soft drinks producers and breweries who are already working on a joint recycling program.”

Nobody expects any strict bans here, such as those imposed on plastic bags in Kenya and Ruanda. However, should the government become active in the medium term and designate rules for PET bottles, for example, the initiative aims to be one step ahead. In this context the new KHS reference system is acting as something of a trigger for the region. KHS has now received orders for further PET lines – not just from Nigeria but also from its neighbors in Ghana and Cameroon. BBC itself is planning to expand its facilities in Agbara as the company wishes to also take on Nigeria’s big soft drinks producers in the future.

The growth in demand for KHS systems and solutions lies not just in the group’s sophisticated technology made in Germany but also first and foremost in its local presence. At its subsidiary in Lagos the engineering company employs over 90 people. More than 70 of them work in After Sales, among them around 40 mechanics, electronics and automation engineers. “Our service strategy has focused on regionalization for years,” Fuchs stresses. “The number of local KHS offices has been considerably increased. And by staging intensive courses of training we’ve brought the machine expertise in Nigeria up to a level that’s more than competitive.”

In the last few years local service personnel were mostly entrusted with the maintenance of existing systems. Thanks to increasingly successful sales in the new machine business this has since changed: at the moment they’re largely occupied with the assembly, installation and commissioning of KHS plant engineering – something that’s new in the region.

This is also the case at BBC: unlike the competition, where third-party contractors are usually assigned, KHS installed the entire line using its own local employees. “We do this work ourselves and don’t contract it out to anyone else,” Fuchs proudly reports. “We had 22 KHS colleagues on our team, some recruited from Nigeria and some from Kenya.” After all, the regional principle applies to the entire African continent and both regional centers for East and Central Africa work closely together. They support each other by pooling their expertise if need be. “The only German was the site manager,” concedes Fuchs.

According to Prahlad K. Gangadharan, CEO of BBC since the beginning of 2020, this regional aspect was even the decisive factor that earned the Dortmund machine and systems manufacturer the contract. “Uncomplicated communication with the local team and assured ongoing support during operation are what spoke for KHS. For us, these are vital requirements in our cooperation,” emphasizes Prahlad.

The project thus went very smoothly – despite the short amount of time available for installation and commissioning. “We kept exactly to the agreed schedule and passed the acceptance test right off the bat,” says Fuchs. “Even on handover the required machine performance of 93% was considerably overshot.” This is also confirmed by BBC boss Prahlad, who explains, “The installation team was extremely efficient and cooperative. KHS gave us unlimited support in every respect and we mastered all challenges together as a team. We as customers were therefore at least as delighted with the finished line as the colleagues at KHS as suppliers. This experience has formed a bond between us.”

Part of the cooperation involved KHS training BBC’s engineers on the operation and maintenance of the new PET line. This was also largely carried out by African KHS service personnel – from both Nigeria and Kenya in another example of the smooth cooperation between the two service hubs. Even now that his own employees have received detailed instruction at the end of the course and are well prepared to deal with any eventualities, Prahlad never tires of stressing how great a role KHS’ local service engineers play for his company. “They’re our first point of contact and react extremely fast. For us, that’s essential.”

It’s good that the competent and highly qualified team at KHS Nigeria can satisfy this demand at all times. The service includes an extensive spare parts warehouse that has been specifically stocked with PET equipment in mind and is equipped for all requirements. “In After Sales we’re now largely independent of Germany or any other subsidiaries and can cover everything locally,” Alexander Fuchs states. “Especially during the corona crisis, with travel limited worldwide and borders closed, this strategy has paid off. We’ve been there for our customers at all times and able to react – in as far as circumstances allowed.”

In 2016 KHS launched a benchmarking program, the aim of which is to strengthen the local service business at KHS subsidiaries in the various regions and promote the international exchange of best practices. Once a subsidiary has been assessed, its performance is compared each year and the evaluation updated to document the course of its development. In 2019 KHS Nigeria was best in class worldwide and even reached champion level – a status which has since been alternately bestowed on the African factory and KHS Brazil. Benchmarking is a key to success in the development and necessary change in the culture, local processes and intercompany cooperation at KHS. 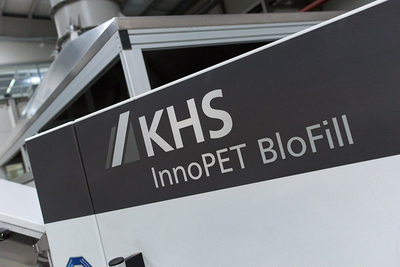 Like many other African companies, BBC also trusts in convincing high-tech engineering made in Germany. 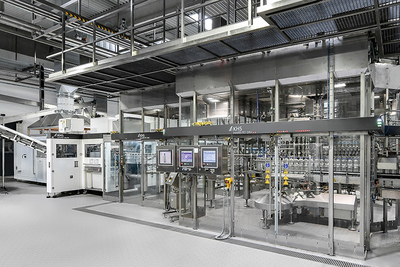 Heart of the PET line for Big Bottling Company is the InnoPET BloFill stretch blow molder/filler block from KHS that forms and fills PET bottles. 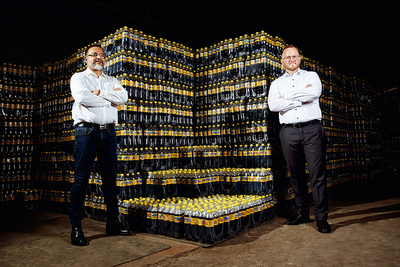 Two partners who can rely on one another: Prahlad K. Gangadharan (left), CEO of Big Bottling Company, and Alexander Fuchs, managing director of Operations for KHS Machines Nigeria. 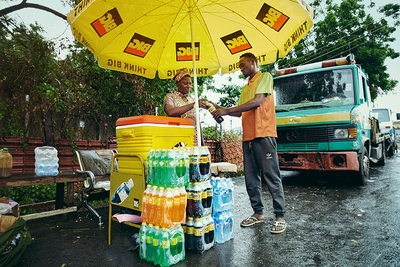 One typical sales channel for soft drinks in Nigeria are street sellers, such as here right outside BBC’s company premises. 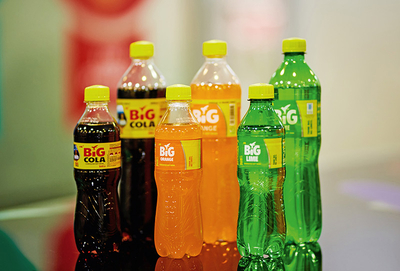 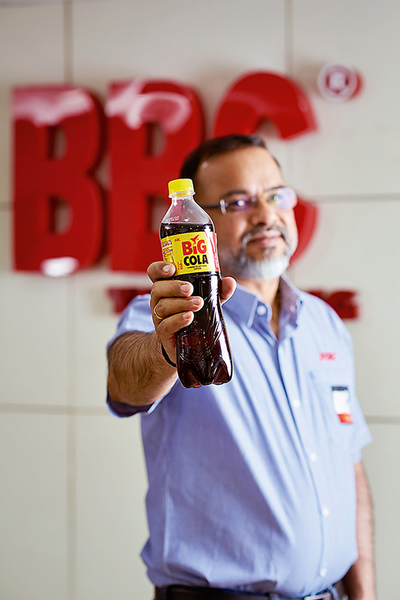 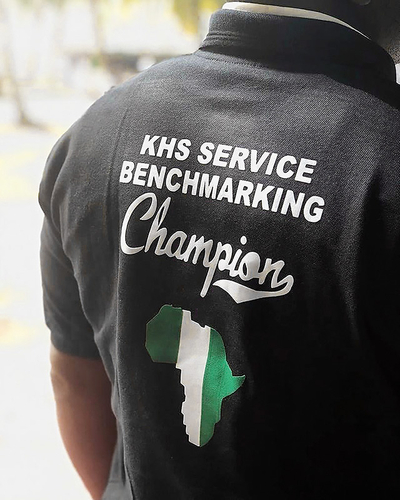 KHS introduced a benchmarking program in 2016 that aims to strengthen its subsidiaries’ local service business and promote international exchange.