Phoenix from the ashes

After a terrible fire: Serbian milk producer Imlek relies on an up-to-the-minute block system from KHS

In 2018 a big fire caused terrible damage to Serbian milk producer Imlek’s production site. One of the many items destroyed was a KHS aseptic filler, just six years old. When it came to procuring a replacement, the company again opted for the Dortmund systems supplier – and for a block system featuring the latest in stretch blow molding technology.

What’s now the Imlek Group has its origins in a farmstead in Glogonjski Rit, a suburb of Belgrade, where in 1953 an artisan dairy farm was established. This transported between 3,000 and 5,000 liters of milk a day from the farm’s 800 or so cows to the city’s markets, initially in metal churns loaded onto horse-drawn carts and tractors. Just four years later the company installed its first pasteurizing and filling line. Its development then gathered pace: by 1963 the dairy was already producing over 20 million liters of milk a year. The 1970s were also marked by growth, with more and more dairies becoming part of the consortium. Since 1991 the company has been run as a stock corporation under the name of Imlek. It now fills over one million liters of milk a day, with its annual turnover amounting to around €300 million. This makes Imlek a market leader – also beyond the Serbian border in the neighboring countries of Montenegro, Bosnia-Herzegovina and Macedonia. Further sales markets include Croatia, Albania, Slovenia and – first and foremost – Russia.

The diary giant was the very first in the Balkans to invest in an aseptic filler in 2012 in order to enable germ-free filling of a section of its portfolio into PET bottles. Its prime aim was to facilitate the export of sensitive products by lengthening shelf lives and lowering transportation weights. Back then Imlek decided to invest in a linear KHS Asbofill ABF 711 filler, as with its very small aseptic zone this machinery permits sterile filling without the need for intermediate sterilization. Up to 12,000 PET bottles holding between 250 milliliters and two liters are processed per hour.

With its vast product range, fast format changeovers are important for Imlek so that it can react with the utmost flexibility during production, where extended shelf life (ESL) and ultra-heat-treated (UHT) milk products are bottled alternately. ESL milk keeps up to four weeks longer than standard bottled milk, for example, with unopened UHT products staying fresh for as long as three to six months. Short, trouble-free product changeovers for the many different smaller product batches in particular give the company greater flexibility, safety and speed over the use of cartons, for instance.

Regarding flexibility, the Asbofill ABF 711 proves convincing with its vast range of bottle and closure design options, the use of which requires no mechanical intervention. One of the KHS aseptic filler’s special features is its small sanitary room that measures just 1.5 cubic meters: in combination with the machine’s room-within-a-room concept, it cuts the risk of recontamination down to practically zero. Limiting sterilization to the necessary areas only – namely just the neck on the outside of the bottle – means that sterilization media can be used more sparingly. Thanks to its compact design the filler also takes up less space and is easier to clean. And as it doesn’t need any extra water during the production cycle, for example, it also scores on sustainability.

The Serbs were so pleased with their KHS technology that the company happily allowed the Dortmund machine and systems manufacturer to use it as a reference for other interested businesses. Colleagues frequently came to visit the Imlek facility in the Belgrade suburb of Padinska Skela to watch the machine in production under everyday working conditions. After all, the dairy had itself opted for a KHS system based on good references and sound recommendations – and hasn’t regretted its decision for one minute.

In September 2018 a devastating fire tore through Padinska Skela, destroying much of the production shop and causing serious damage to property. Like so many other lines and machines, the exemplary technology of the aseptic filler was consumed by the flames. “The end of 2018 and the whole of 2019 were an extremely challenging time for us,” remembers Darko Samardžija, chief supply officer of the Imlek Group. “To guarantee market supply with our products, we had to redirect our contracted milk quantities to our other plants in the region for further processing and to production sites outside the Imlek system. Here, we needed to make sure that all the dairies we sent raw milk to were able to meet our high production standards. After all, we wanted consumers to continue to have Imlek products in their usual top quality.”

At the start of reconstruction a clear decision was made to make the new factory the most modern in the region – a complex task, as Samardžija emphasizes, that was nevertheless completed so quickly and so successfully that the impact of the fire, in which luckily no-one was hurt, was soon forgotten. Imlek’s production site is now a flagship for future-proof high-tech within the milk industry.

The new InnoPET BloFill ACF-L block system is largely instrumental in this, where a latest-generation KHS stretch blow molder, an InnoPET Blomax V, has been combined with a KHS aseptic filler, the Innofill PET ACF-L, for the first time ever. The block boasts a number of further developments that not only make it even more powerful than the previous filler but also more sustainable and more economical – by saving up to 40% in energy, for example. A special transfer module has been designed to join both machines that feeds the continuous PET bottle flow from the rotary stretch blow molder to batch processing on the linear filler. To this end, ten consecutive containers at a time are picked from the bottle flow, accelerated and separated from the following units as a group so that they can then be easily removed by grippers at their downstream stop position and placed in the filler’s carrier plates. Combining the stretch blow molder and filler does away with the need for an air conveyor, resulting in a compact system that saves space, cuts energy consumption and eliminates a potential source of error.

More than just a replacement

The technical details also reveal that time has by no means stood still since the company’s first purchase of KHS machinery in 2012. Despite the misfortune of losing their proven system and the considerable amount of extra organization this subsequently incurred, Imlek can now enjoy a new machine that thanks to its numerous further developments is much more than simply a replacement investment. However, the Serbian dairy group doesn’t need to risk any experiments here. “Our specifications were basically the same as when we commissioned the first machine,” Samardžija explains. “The main emphasis was to ensure product quality and production stability. And with our new acquisition we again attached great importance to a high degree of flexibility so that we can produce our various volume formats on the same machine.” The block setup means that a full format changeover can now be performed in the space of just ten minutes, taking up to 40% less time compared to single machines with an air conveyor.

The filling volume accuracy has also been improved by around 30% over the old filler. Electromagnetic induction flow meters with new evaluation software and tried-and-tested algorithms are also used in the aseptic zone to achieve this. They ensure consistent head space volumes and thus identical fill levels in the bottles and minimize the risk of excessive foaming.

The modular design of the Innofill PET ACF-L aseptic filler is also new. It basically allows optional empty modules to be planned for on procurement. These leave space for filler retrofits, such as foil sealers or dosing units for fruit chunks, should these need to be later included in the portfolio.

Finally, the KHS Innopack Kisters SP Basic from 2012, a shrink packer that can wrap up to 10,800 packs an hour in film, also forms part of the restored line at Imlek. The packaging unit is one of the few pieces of equipment in the machine park to have survived the fire unscathed. Following a general overhaul, it’s again now fully functional. “On the new line, like on the old one, we fill fresh milk in various formats and chocolate milk,” says Samardžija. In the near future Imlek wishes to further exploit the various new options already provided by its state-of-the-art technology and associated increase in flexibility. “We can imagine expanding the portfolio of our aseptic filler in the future to also include milk shakes and flavored milk,” the dairy's chief supply officer tells us.

The Serbs currently process around 200 products. The majority of its sales is generated with fermented milk products and fresh and ultra-heat-treated milk. Financially no less significant but much smaller in volume are product categories such as dairy spreads, butter and standard value-added products. The company isn’t only looking ahead when it comes to its production technology but also with respect to its portfolio: besides standard and organic milk products this includes lactose-free products and the probiotic Imlek Balans+ line for all those who pay particular attention to digestion and immunity. “This year we launched Imlek Protein to market, a protein-rich, lactose- and sugar-free milk beverage specially geared towards people who watch their diet and do sport,” states Samardžija. “Products like these have been a focus of the international milk industry for some time now. It’s thus only logical that we offer our consumers on the home market beverages in this segment.”

The Serbian milk magnate’s modernity also encompasses a strategic commitment to more sustainability. “With a mind to our responsibility to the environment, we’re the first local milk producer to fill our Moja Kravica brand into packaging made of recyclable, bio-based plastic,” Samardžija tells us, not without pride. “Even the caps are made of plastic that comes from plants, namely from sugar cane.” One thing is clear: since its early beginnings as a local milk supplier on a farm on the edge of Belgrade, Imlek has come a very long way indeed – and is far from reaching the end of its impressive development. 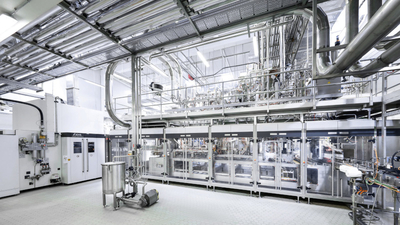 The InnoPET BloFill ACF-L aseptic block from KHS is now part of one of the most modern dairies in the region. It incorporates a stretch blow molder of the newest generation. 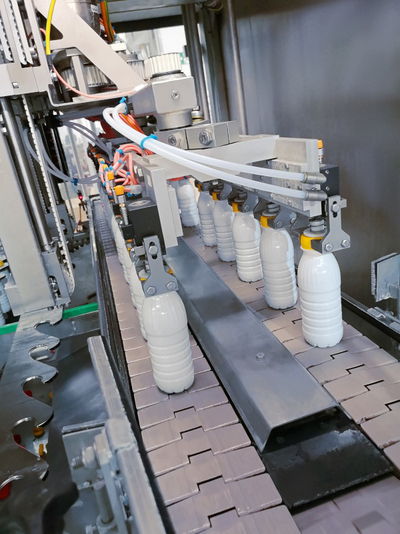 Filled and capped PET bottles leaving the stretch blow molder/filler block on their way to the sleever. 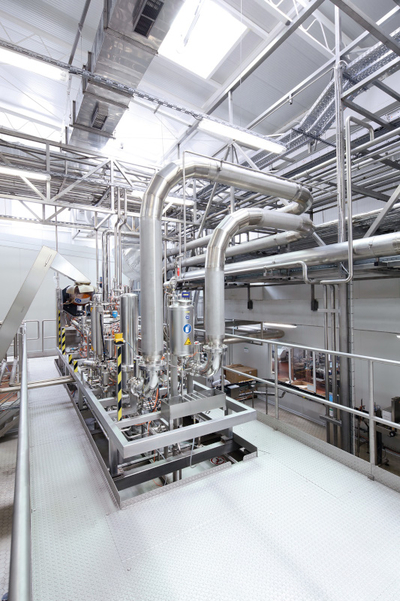 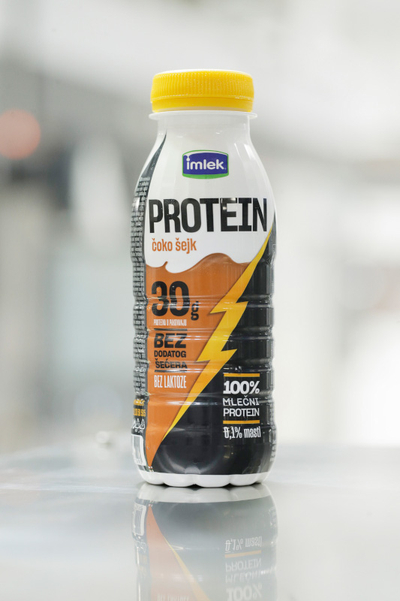 This low-fat, sugar- and lactose-free chocolate shake is one of the products in Imlek’s new protein range. 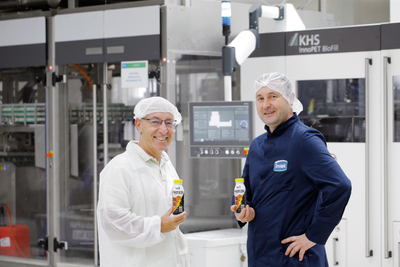 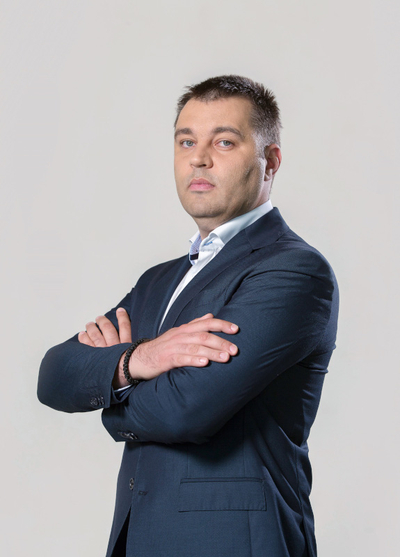 “When making our new acquisition, ensuring product quality, production stability and flexibility was of particular importance to us,” says Darko Samardžija, chief supply officer for the Imlek Group.