Like the KHS Group, Pyraser Landbrauerei from the Franconia region of Germany looks back on a turbulent company history – one that began at practically the same time as KHS’.

Dortmund, May 18, 2020 –Like the KHS Group, Pyraser Landbrauerei from the Franconia region of Germany looks back on a turbulent company history – one that began at practically the same time as KHS’. The success story of the Dortmund specialist for filling and packaging systems started in 1868. Just two years later Pyraser launched its first country beers to the local market. About 150 years on, the two traditional companies are now writing history together, with the Landbrauerei investing in an efficient, automated glass filler from KHS.

Seven days from ingress to production start was the clear instruction from Pyraser Landbrauerei – one that KHS followed to the letter. “It was successful open-heart surgery where nothing was allowed to go wrong,” smiles master brewer Helmut Sauerhammer. The brewery had gradually renewed its bottle cellar and in the process invested in a KHS Innofill Glass DRS glass bottle filler. Among other aspects, the decision-makers at the Franconian brewery were quickly convinced by the machinery’s consumption values and the low-oxygen filling process so essential when bottling beer. The patented KHS DRS-ZMS filling system uses just 210 grams of CO2 per hectoliter of beer. “We need a lot less carbon dioxide than the usual quantity common to the market to yield the same or even better residual oxygen values,” states Mike Herrmann, KHS Sales Germany and the man responsible for the project.

Another special feature at the country brewery is that Pyraser closes its beer bottles with aluminum caps. Because of this and the greater volume more oxygen would normally be pressed into the bottle compared to the amount required with classic crown corks; this would be detrimental to the beer as the product would then age more rapidly. To minimize oxygen pickup, the KHS glass filler therefore blasts the aluminum roll-on caps with CO2 in the capper. This joint development with the brewery means that the very good oxygen values in the bottle are the same as those for crown corks.

Furthermore, the Innofill Glass DRS works with automatic CIP caps. “On the one hand, cleaning is considerably simplified as a lot less effort is needed for operation. On the other, the time saved as a result boosts efficiency in production,” Sauerhammer says. The number of manual interventions is reduced, as are toolless format changeovers thanks to hygienic QUICKLOCK fast-acting locks. The program is automatic and operated at the press of a button. Up until now employees had to place the CIP caps on the filling valves by hand. Cleaning processes can now be preset for specific times. They start automatically, with no manual intervention necessary. Any potential contamination of the filler, as could be the case where CIP caps are applied manually, is also prevented.

The new investment is also convincing with regard to sustainability. With its separate cooling circuit the ECO vacuum pump significantly reduces water consumption, meaning that Pyraser Landbrauerei uses only 80 liters an hour instead of the previous 800.

With the Innofill Glass DRS breweries profit from cutting-edge technology from the high-performance range and from a clearly structured machine design which considerably facilitates both operation and the entire production process. Pyraser Landbrauerei fills up to 26,000 bottles of beer or a maximum of 24,000 bottles of soft drinks per hour – with no hitches whatsoever since commissioning, Sauerhammer claims. “I’ve never known the first filled product to be ready for sale as quickly as here. We’re delighted!"

Pyraser Landbrauerei is a brewery based in the suburb of Pyras in the little town of Thalmässing in Franconia, Germany. 190,000 hectoliters of beverage were produced in 2017, with 40% of this beer. The brewery has been a member of Die Freien Brauer or independent brewers initiative, a community of medium-sized breweries chiefly from Germany and Austria, since September 2015. The brewery currently bottles 22 types of beer, some of which are only available at certain times of the year. Mineral water and soda pop are also sold under the brand name of Pyraser Waldquelle. 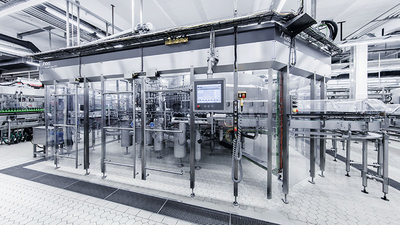 Pyraser Landbrauerei has gradually renewed its bottle cellar and in the process invested in a KHS Innofill Glass DRS glass bottle filler. 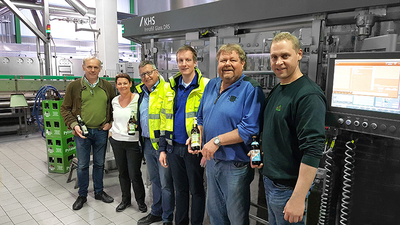 All those involved in the project are very pleased, for KHS kept to the instruction issued by Pyraser Landbrauerei: seven days from ingress to commissioning.