In order to satisfy the growing demand for beer in cans in the Czech Republic, Platan Brewery, part of the Lobkowicz Group, recently ordered a modern canning line from KHS. The challenge here was that the available area for the new machinery was much smaller than usual. This motivated the Dortmund systems supplier to provide an especially sophisticated, individual setup.

The ban on smoking and tougher legislation for bars and restaurants in the Czech Republic have boosted the sale of canned beverages as many pubs have been forced to close and the demand for beer in kegs has thus dropped. As a result the Czechs – who have the highest per capita consumption of beer in the world – have begun to drink their national beverage more and more out of individual packs. Non-returnable PET bottles were at first very much in demand, with cans now especially popular. In the past the percentage of kegs filled by breweries was at 50%, with the share for glass bottles at 45%. Just ten years ago canned beer held a mere 2.5% share of the entire Czech market; this figure has since climbed to 10%. According to the forecasts, this is expected to rise to 20% within the next three years.

This development has not passed successful Platan Brewery by without consequence. A medium-sized brewery in the Lobkowicz Group, at the start of 2017 Platan set the course for its future-proof packaging portfolio. In order to meet the growing demand of its fellow Czechs and manage its increasingly successful export business the brewery decided to optimize its facilities and invest in high-quality plant engineering. It also wanted to establish its craft beers in the can segment. KHS’ worldwide references in canning lines and convincing energy balance in particular ultimately triggered the decision in favor of the systems supplier from Dortmund, Germany, as the Czech brewery wished to considerably cut down on its electricity costs, particularly in the canning line’s packaging and palletizing section.

In order to perfectly accommodate its customer’s requirements, KHS came up with an individual, sophisticated concept which caters for the brewery’s specific situation: instead of planning a line layout with an optimum footprint of around 50 x 50 meters KHS designed the new canning line to fit an existing split-level production area which measures just 20 x 20 meters. The result is a highly efficient setup spread out over three levels. The palletizer and bulk depalletizer for the automatic infeed of empty cans and discharge of full cans are installed on the first floor. Actual production takes place on the second level, with a platform for packaging processes planned by KHS for the newly built third story. Two lifts supply packaging materials and convey the packed pallets to the bulk depalletizer. The line outputs up to 20,000 cans per hour, regardless of their format. These hold either 0.33 or 0.5 liters and are filled with lager, light beer or alcohol-free beer.

Platan also has optimum quality assurance thanks to a further technical highlight: KHS has equipped the new clean room with an additional air conditioning unit. This enables the beer to be filled at a constant 12°C. The brewery is also thrilled by the oxygen discharge from the integrated KHS Innofill Can DVD filling system; 30% less CO2 is now required than in conventional systems of this size to purge oxygen from the beer cans prior to filling. KHS has also met the Czechs’ energy efficiency specifications: instead of electricity the two packing systems are heated by gas heaters specifically customized to the relevant processes. This means that the system consumes up to four times less energy, namely, according to the meter, 37 kilowatts per hour as opposed to 120 to 150 kilowatts per hour. 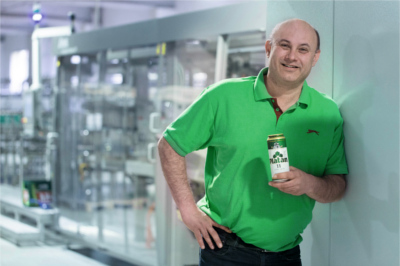 As regards flexibility, the special KHS canning line is perfectly tailored to Platan Brewery’s requirements. To date it processes twelve different styles of beer – with more in the pipeline. It is thus especially important that conversions are quick and simple. The fastest changeover time, including cleaning, is just one hour. The KHS equipment is also highly flexible when it comes to packaging. On a two-way system the cans are processed by either a KHS Innopack Kisters SP shrink packer or a KHS Innopack Kisters TSP tray shrink packer.

The Czech beer specialist very much appreciates the service provided by KHS, too – both during the entire design engineering and commissioning process and at the production stage should any questions arise. The seven members of the team at KHS Czech are just one hour’s drive away from Platan Brewery in Protivín.

„Easy conversion was a prime objective for us. In this respect KHS technology is far more progressive than the other equipment we’ve been familiar with to date.“

(Michal Voldrich, head of Platan Brewery in the Lobkowicz Group)