Top quality from the beer czars

In just two years the Georgian Beer Company came from nowhere to become the second largest brewery in Georgia. The recipe for success: the entrepreneurial spirit of owner Tsezar Chocheli – and first class quality that convinced even the König brewery. KHS is supporting the Georgian beer brewery on its way to the top with high-quality filling technology.

From the very outset, the Georgian Beer Company relies on the high-quality and extremely efficient KHS filling lines for PET containers, cans and kegs “which have all played a great part in the success of the brewery“ says Chocheli. In this way the brewery achieves its aim of only offering top quality. This convinces even the König brewery: the Georgian Beer Company is the first brewery in the world to obtain a license to brew König Pilsener. The renowned „KöPi“ is extremely well received by Georgian customers alongside own brands Zedazeni and Khevsuruli.

During the filling process, Chocheli and his team, without exception, put their trust in KHS technology:

the Innokeg CombiKeg keg line, the Innofill DVD can filler and a PET turnkey system with the blow molding machine/filler block InnoPET BloFill, have been performing outstandingly well in the halls of the Georgian Beer Company. A turnkey glass system is also set to be installed in 2014. Thus, the next stage of development is being reached, i.e. a rate of 660,000 hectoliters per year.

Besides the highly successful beers, the product range of the Georgian Beer Company also includes various premium lemonades (exclusively with natural flavors) and the first energy drink to be produced in the country. “We want to become the largest producer of beer and non-alcoholic beverages on the Georgian market”, says Chocheli. “We may already be able to achieve this goal this year.”

The breathtaking success story continues: the collaboration between the Georgian Beer Company and KHS and therefore the interaction between unparalleled entrepreneurial spirit and first-class technology is writing the next chapter! 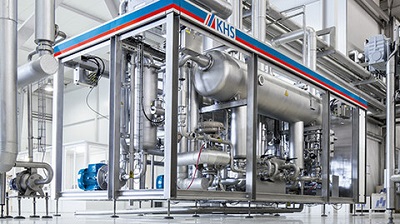 „For us, the highest possible beer quality is the top priority. For this reason we invest in KHS technology.“