Portugal‘s strongest beverage company in terms of sales and turnover makes the biggest investment in its nearly 125 year-long history and will consciously put its trust in KHS as a supplier and partner of the hour.

The Portuguese beverage producer Unicer Bebidas came into being as early as 1890. Its history has been shaped by numerous strategic reorientations, which have brought the company to the top of Portugal‘s beer and water market today. Previous milestones include, for example, the privatization of the state company in 1990, followed by diversification into non-alcoholic beverages, wineries and coffee production in 2001, and finally the revival of the traditional brewing and water sector in 2006.

The successful company currently operates in around 50 foreign markets in Europe and beyond. In order to maintain its leading position, the managers recently dared to take a brave step and decided to implement an ambitious project:

Unicer invested around EUR 100 million in nine KHS systems and machines, which should be put into operation within a project period of 15 months.

In total Unicer ordered two turnkey glass lines, as well as three fillers for glass bottles, three keg cleaning and filling systems and a pasteurizer as replacement investments for existing lines. Thanks to sophisticated technology, a detailed system simulation and the consistent organization of all project partners, it was possible to adhere to the tight schedule – the implementation of one of the most significant investment projects in Portugal was a complete success. 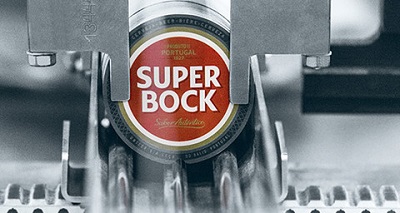 „We associate the KHS brand with the very best filling technology that will ensure the consistently high quality of our beer in bottles or kegs over a long period of time.“

„We are very pleased with our new filling facilities. They work with the absolute minimum of oxygen intake and are an important element of our quality concept.“