Algerian beverage producer SARL Nomade specializes in bottled water. As its success has grown, so have its requirements: when it recently decided to modernize its plant equipment to boost capacity and make production more sustainable and efficient, the company invested in quality from KHS.

If you find yourself at the source of supply, you should make use of it. This is a motto beverage producer and established water bottler Nomade in Algeria has taken to heart. The company is based in Algeria’s Soumam Valley which is famous for the excellent quality of its water. Nomade fills its popular water rich in minerals from the springs found on the south slopes of the Djurdjura Mountains – and in doing so has managed to successfully establish itself on a very competitive market. The company started business twenty years ago, initially filling soda pop in the small capacity range. It has since specialized in the bottling of water as it profits both from its geographical location at the source of supply and from an increased demand among the Algerian population. Water consumption in the cities and in farming is constantly on the rise. As the tap water here contains a high amount of chalk, fresh, high-quality water dispensed from a safe form of packaging has become more and more popular. The PET bottles filled with the Ayris brand are in such demand that Nomade recently reached the limits of its capacity.

The innovative InnoPET BloFill stretch blow molder/filler block from KHS provided the company with the perfect solution here. Thanks to its presence on the African market the Dortmund systems supplier was already known to the Algerians, prompting the beverage producer to rapidly enter into partnership with KHS. The reliability and compactness of the space-saving system were what primarily persuaded Nomade to invest in KHS technology. Connecting the stretch blow molder directly to the filler eliminates the need for the air conveyor, feed plate and bottle rinser. Another plus of the InnoPET BloFill is its energy efficiency: since commissioning the line the amount of energy used has dropped considerably, improving the sustainability of operations.

With a production capacity of up to 81,000 bottles per hour the KHS stretch blow molder/filler block satisfies all of Nomade’s current requirements, also leaving plenty of room for further capacity expansions should demand continue to increase. At the moment the company fills 40,000 PET bottles per hour containing 0.33, 0.5 and 1.5 liters.

This order was just the start, however: the next project is to install a second complete PET line for the bottling of carbonated and non-carbonated water. In doing so, Nomade will replace an older system and complete the modernization of its plant engineering. All beverages will then be exclusively filled on equipment manufactured by KHS. There are also plans to bottle fruit juices and carbonated soft drinks in the near future. 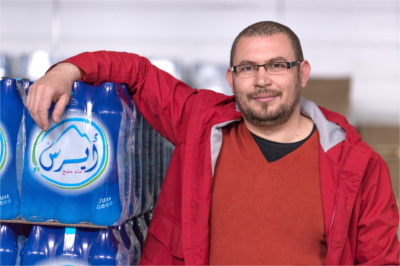 Nomade’s cooperation with and modernization through KHS do not merely involve the machinery, however; its bottles have also been given a new look. A new, fresh design has been developed with the help of the Bottles and Shapes™ program which is perfectly tailored to suit the concepts and requirements of the beverage producer. Nomade is happy to share its positive experience with others: when other beverage bottlers come to have a look at the modern machines, the Algerians can fully recommend entering into a partnership with KHS with absolute conviction. After all, it now not only has water from a top source but also a production line.

„We now work much more efficiently. Not only have we considerably increased our capacity; we’re also benefitting from fast format changeovers and automatic operation. When we have questions, we receive help quickly and without any fuss. To put it quite simply, we’re completely satisfied.“

„From first making contact to the commissioning of the system our work together has been characterized by mutual trust and appreciation.“

Yasmine Brahimi, project manager for Africa and the Middle East at KHS